Anti-sub drones up for sale at air show 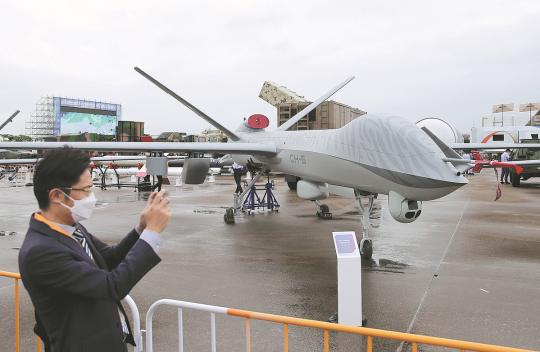 Detecting, tracking and hitting submarines are tough challenges for any navy because such tasks require sophisticated, expensive hardware and well-trained, experienced personnel.

For most militaries around the world, anti-submarine operations are too difficult to carry out due to the lack of affordable weapons.

However, China is now offering them a convenient solution: an advanced unmanned submarine-hunter system — the maritime patrol variant of the CH-5, one of China's top combat drones for export.

According to China Academy of Aerospace Aerodynamics in Beijing, maker of the CH-series drones, the latest CH-5 variant is tasked with handling "complicated marine situations and environments" and features long operational time and flight range.

According to Shi, the CH-5 drone has a maximum speed of 290 kilometers per hour but usually flies at cruising speeds ranging from 180 to 220 km/h. It has a maximum takeoff weight of 3.3 metric tons and can carry up to 480 kilograms of equipment and weapons.

The aircraft is capable of staying in the air for up to 35 hours.

A CH-5 maritime patrol drone is on display at the 14th China International Aviation and Aerospace Exhibition in Guangdong province's Zhuhai, with detection and sonobuoy launcher devices mounted under its wings.

A video clip released by Shi's academy at the air show shows a CH-5 maritime patrol model dropping a sonobuoy above seawater.

Wu Peixin, an aviation industry observer in Beijing, said that the United States has modified some drone models for anti-submarine warfare and it has proved that anti-submarine drones are a useful asset in sea operations.

"Compared with fixed-wing aircraft and helicopters designed for anti-submarine purposes, the biggest advantages of such drones are that they can stay much longer over the target zone, they are much cheaper to buy, operate and maintain, and that several drones can be networked to increase the odds of finding hostile submarines," he explained.

The Beijing-headquartered academy is one of China's top military drone exporters. More than 200 medium- and large-size combat drones in the CH family have been sold to more than 10 foreign countries, making it the most popular and combat-proven drone the country has exported, according to statistics from the academy. In the past five years, about 100 medium-and large-size CH-series drones were delivered to foreign users.