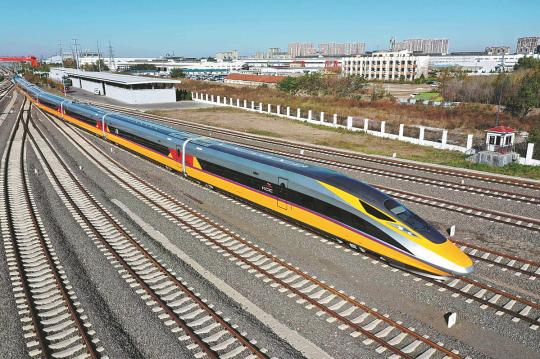 The inspection train to be used on the Jakarta-Bandung High-Speed Railway stands in sidings at CRRC Qingdao Sifang Co in Qingdao, Shandong province, before being shipped to Indonesia. (Photo courtesy of KCIC)

A bullet train test run will ap this year's Indonesian presidency of the Group of 20 Summit.

The train will operate on a new high-speed line, a key joint Sino-Indonesian project that is part of the Belt and Road Initiative and which is expected to boost Indonesia's economic potential and promote connectivity in Southeast Asia.

More important, the project underscores the strength of economic cooperation between the two nations and how such collaboration stands to benefit not just them, but the rest of the region.

While Indonesian officials are preparing for next week's G20 Summit on the resort island of Bali, the PT Kereta Cepat Indonesia China, or KCIC, consortium is busy laying the groundwork for the Jakarta-Bandung High-Speed Railway.

Indonesia's first bullet train has a top speed of 350 kilometers per hour — significantly reducing the three-hour journey time between Jakarta, the nation's capital, and Bandung in West Java province. The train will complete the 142-km journey in just 40 minutes.

The project, which is nearly 90 percent complete, is expected to be operational by the middle of next year. A trial section of the line completed on Saturday is ready for the test run.

Luhut Binsar Pandjaitan, Indonesia's coordinating minister for maritime affairs and investment, said the test will be staged on Wednesday to coincide with the G20 summit.

He said it is not only Indonesia that stands to benefit from the project, which will also help realize the Association of Southeast Asian Nations' or ASEAN's "big idea of regional connectivity through seaports, airports and other fast trains".

"We expect the railway to be part of international connectivity, either by integrating it with seaports or airports," Widodo was quoted as saying by Antara, Indonesia's state-owned news agency.

Widodo alluded to the Master Plan on ASEAN Connectivity, which features a key strategy to build a railway system aimed at easing travel throughout the region.

Andyka Kusuma, public transportation analyst/researcher at the University of Indonesia's civil engineering department, welcomed the project, as it will benefit regular commuters.

"Travel time for the public will be reduced, enabling workers living in areas outside of Jakarta and Bandung to work in the two cities," he said.

Kusuma compared the project with the high-speed line China developed between Beijing and Tianjin, which led to the building of a vast high-speed rail network nationwide.