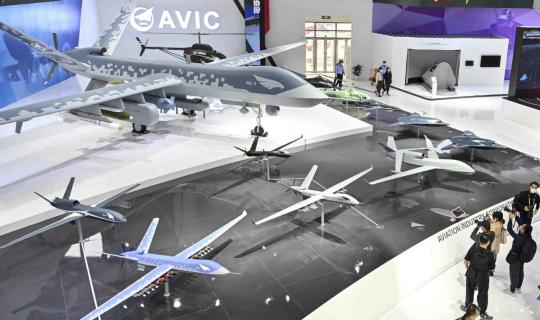 Developed and built by AVIC Chengdu Unmanned Aerial Vehicle System, Wing Loong 3 is 12.2 meters long, 4.3 meters tall and has a wingspan of 24 meters. It has nine payload hardpoints and can carry as many as 16 missiles and bombs.

Zhou Yi, chief designer of Wing Loong 3, said that with a takeoff weight of around 6 metric tons, the drone is the heaviest of its kind in China.

"Wing Loong 3 is capable of carrying out intercontinental operations including long-distance surveillance or reconnaissance, strikes against time-sensitive targets, and long-duration air patrol. In addition to military tasks, it can play a helpful role in a wide range of civilian missions such as atmospheric measurement, signal relay and emergency rescue," he said.

Currently, the company is working to establish the mass-production capacity of Wing Loong 3, according to AVIC.

Du Wenlong, a retired researcher from the People's Liberation Army's Academy of Military Science, said Wing Loong 3 is characterized by its long flight range and a wide variety of munition options.

The drone is able to hit multiple targets on the land or at sea in one operation, boasting an outstanding strike efficiency, he said.

The new aircraft's major predecessors — Wing Loong 1 and 2 — are very popular on the international arms market and have been sold to many countries.

According to weapons observers, users of the Wing Loong series of drones are mainly in Africa and the Middle East, including Nigeria, Egypt and the United Arab Emirates. Some Wing Loong 1 have also been exported to Serbia.

Managers at China National Aero-Technology Import and Export Corp, an AVIC subsidiary and the biggest exporter of aviation defense products in China, said that the Wing Loong series of drones have been internationally renowned for their good capabilities and combat records.

In addition to military clients, AVIC has also been eyeing the civilian market and has built several civilian models based on Wing Loong 2 and Wing Loong 10 combat drones to serve emergency response, communication relay, weather forecast and other public service operations.