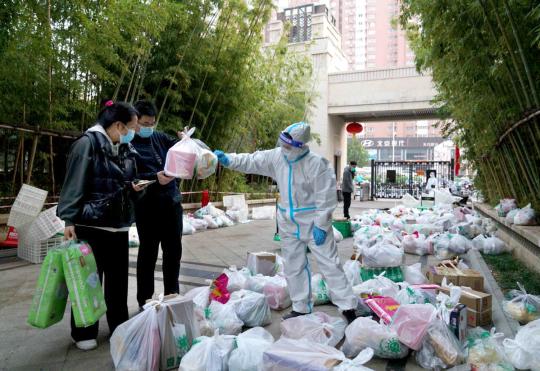 Guangzhou extends restriction in district as transmissions in community remain

The Chinese capital has effectively controlled the COVID-19 outbreaks that have occurred continuously since late September, and the Beijing Marathon, which was held on Sunday, has greatly boosted the confidence of the city in epidemic prevention and control as well as economic development, a senior official said.

The marathon, which attracted approximately 20,000 runners, was the first major sporting event held in the capital since the Winter Olympics and Paralympics in February and March.

However, Beijing is still facing infection risks from both local spreading and imported cases, Xu Hejian, spokesman of the municipal government, said at a news conference on Monday.

Between midnight and 3 pm on Monday, Beijing recorded 33 confirmed local COVID-19 cases, among whom one was detected at the community level, according to the Beijing Center for Disease Prevention and Control.

Pang Xinghuo, deputy director of the center, said several infection clusters since Oct 27 in Beijing were caused by imported cases related to a mall in neighboring Hebei province.

"Those epidemic clusters involved 12 districts in Beijing and most of the areas have been basically controlled effectively," she said. "The new cases are mainly in Chaoyang district."

Responding to inquiries and worries from residents who encounter difficulties returning to the capital due to control and prevention regulations, the government will improve the service mechanism and expand the emergency channels for people who need to enter the capital for medical services or important business, as well as people whose family members are in critical health condition, Xu said.

In recent days, many people complained that they have been blocked from entering Beijing after they received a risk alert from Beijing Jiankangbao, or Health Kit, a mobile-based app used to check health codes.

Li Yuan, a businessman who hasn't been to any high and medium risk areas, got a risk alert from Beijing Jiankangbao during his business trip in Hangzhou, Zhejiang province, and he is unable to buy a ticket to get back.

Such complaints have aroused attention and the authority said people who have any problems getting back can call the 12345 hotline to report their situation for help.

"Their request will be replied to and solved in time," Xu added.

In the southern metropolis of Guangzhou, Guangdong province, the risk of transmission at the community level still exists, with more new infections being reported over the weekend, according to the local health authority.

"In addition to concentrated cases being reported in the hardest-hit Haizhu district, there were also sporadic cases found in the districts of Baiyun, Panyu and Liwan, posing risks of further spread of the virus at the community level," said Zhang Yi, spokeswoman of Guangzhou Health Commission.

The city reported the highest level of new infections in a single day on Sunday, with 122 new locally transmitted confirmed cases and 1,813 asymptomatic carriers, according to the local health commission.

Of the infections, most were detected in quarantine sites and closed-loop management areas, with only eight found during nucleic acid tests in local communities.

All infections have been sent to designated hospitals or makeshift hospitals for treatment, without reports of cases in critical condition, according to Zhang.

The number of new infections reported in Haizhu accounted for 94 percent of the city's total in the last three days, Zhang added.

New infections were mostly concentrated in Haizhu's Kanglu, Kecun and Datang areas, which are densely populated, with narrow spaces and poor ventilation, the authority said.

"The district of Haizhu remained the main battlefield in prevention and control against the latest round of COVID-19 pandemic," Zhang said during a news conference.

Moreover, reserved hotels for quarantining people from high-risk areas have also been put into operation, with 34,000 people transferred to other cities for quarantine.

Given an increasing number of new infections in Haizhu over the past few days, a strict policy issued by the district authority before the weekend will be extended until Friday, according to Zhang.

All public transportation was suspended in Haizhu and residents living in the district were required to stay at home, except for those who have to seek medical help or be tested for the virus, according to the policy.

Separately, Zhengzhou in Henan province apologized on Sunday night for problems exposed during the recent outbreak and containment measures. The city was singled out by State Council's Joint Prevention and Control Mechanism for replacing targeted control measures with snap lockdowns.

Li Huifang, deputy secretary-general of the city government, said that multichain transmission has posed great challenges in city governance and services, so that sometimes the local government failed to transport patients in time, offer sufficient necessities, or take targeted prevention and control measures. These greatly affected people's work and life, for which the government sincerely apologizes.

Zhengzhou is actively working on rectifying such behavior and punishing those responsible, she said.

Chen Meilingcontributed to this story.