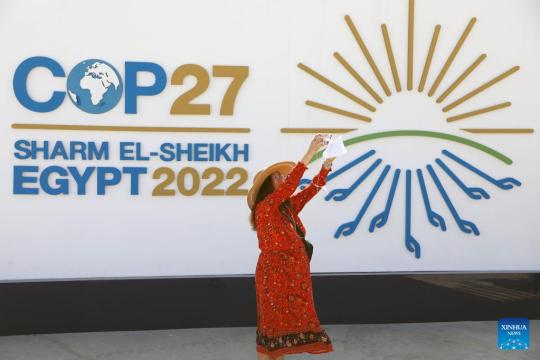 A woman takes pictures in front of a display board of the 27th Conference of the Parties of the United Nations Framework Convention on Climate Change (COP27) in Sharm El-Sheikh, Egypt, Nov 6, 2022.(Photo/Xinhua)

The 27th session of the Conference of the Parties (COP27) to the United Nations Framework Convention on Climate Change (UNFCCC) started Sunday in the Egyptian coastal city of Sharm El-Sheikh, with countries jointly seeking to combat the global climate crisis.

In the past year, in addition to climate change and the lingering impact of the COVID-19 pandemic, the world has been battered by multiple crises such as geopolitical conflicts, higher energy and food prices, increasing inflation, and frequent extreme weather events.

Under such circumstances, the convening of the climate conference appears all the more important. Collective, complementary and collaborative actions by countries around the world to adapt to the effects of climate change, mitigate its negative repercussions, and provide climate finance have become the focus of this year's conference agenda.

Since the beginning of 2022, heatwaves, torrential rains, floods, droughts and other natural disasters occurred one after another around the world. Europe has experienced unprecedented high temperatures and heatwaves not seen in centuries, as well as frequent droughts and wildfires. One third of Pakistan has been completely submerged by historic flooding. Powerful hurricanes have made thousands of families homeless in the United States.

Yet, Robert Stefanski, the World Meteorological Organization's chief of Applied Climate Services, said 2022 may be the year with the best climate from now on. He warned that if the world does not take urgent actions, extreme weather events such as heatwaves, droughts and floods may become the "new norm" in the world.

Should global warming reach 3 degrees Celcius by 2100, according to a UN report, drought losses could be five times higher than they are today, with the largest increase in the Mediterranean and the Atlantic regions of Europe.

The UN Food and Agriculture Organization (FAO) estimates that by 2030 Africa will lose two-thirds of its arable land if the march of desertification -- the spread of arid, desert-like areas of land -- is not stopped. Since the beginning of this year, many African countries are facing the risk of food shortages or supply interruption, even in countries with rich water resources.

The loss and damage caused by global climate change have become one of the top issues, said Egypt's chief climate negotiator Ambassador Mohamed Nasr, adding that "the international response is still not up to the challenge of the impacts."

"We have witnessed during this year painful events in Pakistan, the African continent and various parts of Europe and America. All these events and the destruction and impact represent a lesson to be learned and alarm all over the planet ... to more precaution, and to act quickly to take all necessary measures as per our commitments and pledges," Egyptian Foreign Minister and COP27 President Sameh Shoukry said at the opening ceremony of COP27.

"Dealing with climate change problems is obligatory, not a choice," said Egyptian climate and environment expert Magdy Allam. Under the slogan of COP27 -- Together for implementation -- the host country Egypt calls on countries across the globe to convert their previous commitments on climate change from lip service to action, he said.

"We know that we have reached a point where finance makes or breaks the progress of the program ahead of us," Alok Sharma, president of COP26 hosted in Glasgow, Scotland, said Sunday during the opening ceremony of COP27, highlighting the important role finance plays in this conference.

However, since the 2009 climate change conference in Copenhagen (COP15), developed countries have not been able to fully deliver on their commitment of providing 100 billion U.S. dollars of climate finance per year to developing countries.

"Parties enjoy getting into the process of planning all the time. But nothing is happening on the ground," Nasr said. "Who will be paying the price?"

"Climate change-related efforts over the past decades were remarkably polarized, which has slowed down progress of the negotiations," Shoukry said Sunday, adding the pledge to mobilize 100 billion dollars per year has not yet been honored.

Yasmine Fouad, Egypt's environment minister and ministerial coordinator and envoy for COP27, noted that Africa accounts for 4 percent of global greenhouse gas emissions, but suffers the most from them, and that 20 percent of the continent's population live in countries that are in the top 10 most vulnerable to climate change.

As such, a significant step for the world to jointly address climate issues is that developed countries provide adaptation funds for developing countries, and the amount of the funds needs to be constantly increased, said Allam. "When soft loans and aid to poor countries increase, this will reduce these countries' share in chopping and burning forest trees which are the lungs of the globe," he said.

"The countries of the African continent have shown their willingness to confront climate change, but they need support," Shoukry said.

Apart from urging developed countries to honor their pledge on current climate funding which focuses on cutting carbon emissions to prevent climate change in the future, this year's conference also introduced the loss and damage funding into the agenda to compensate countries that cannot avoid or "adapt" to the changes that have already happened.

Since the United States and the EU have imposed an embargo on Russian oil and gas after the outbreak of the Russia-Ukraine conflict, the current energy crisis in Europe has forced many countries to fall back to traditional energy sources such as coal. At the same time, explosions in the Nord Stream pipelines have released a large amount of natural gas into the atmosphere, putting global emission reduction achievements in jeopardy.

"Now Europe, after the Russian gas was cut, tends to use any kind of fuel and escaped its climate change obligation," Allam said, adding that "the Russia-Ukraine conflict shows the world that we should search for alternatives, turn to the green economy and change our concepts of consuming energy."

While the developed world has suffered setbacks, many developing countries have maintained an ardent and persistent desire for green development despite challenges.

China's Special Envoy for Climate Change Xie Zhenhua said Sunday at a side event of COP27 that China has been actively creating a green and low-carbon atmosphere for years, encouraging the public to participate in carbon emissions reduction, and exploring to establish a pluralistic mechanism of social participation.

Under the principles of openness and transparency, broad participation, consensus and party-driven, China will work with all parties to promote the success of COP27 and contribute its wisdom and strength to building a fair, reasonable and win-win global climate governance system, Xie said.

"Green development is not an alternative, but an irreplaceable way for the world to limit carbon emissions and protect the environment," said Waleed Gaballah, professor of financial and economic jurisdictions at Cairo University.

Countries need to show faith in multilateralism as they negotiate to deliver on the goals of the UN Climate Convention and the Paris Agreement, Shoukry said.

"No one can be a mere passenger on this journey," UNFCCC Executive Secretary Simon Stiell said Sunday at the opening ceremony of COP27.