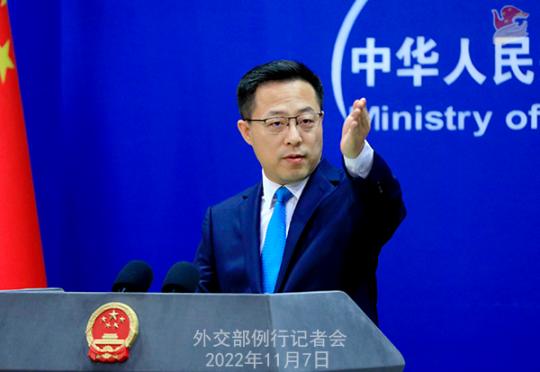 China called on the United Kingdom on Monday to earnestly respect its sovereignty and stop any form of official exchanges with Taiwan, after news emerged of a British minister's intention to visit the island.

Foreign Ministry spokesman Zhao Lijian made the remark at a daily news briefing as Britain's Department for International Trade announced that Greg Hands, a minister of state at the department and a member of the UK Parliament, would visit Taiwan this week. During his two-day trip, Hands would meet Taiwan leader Tsai Ing-wen and co-host trade talks.

"China urges the UK to abide by the one-China principle, which is the political foundation for the two nations to develop bilateral ties and stop sending wrong signals to 'Taiwan independence' separatist forces," Zhao said, adding that there is only one China, and Taiwan is an inalienable part of China's territory.

He also issued a stern warning to Taiwan authorities, saying that their attempts to collude with external forces to seek "independence" are doomed to fail.

In another development, Zhao expressed strong dissatisfaction with and firm opposition to a so-called joint statement issued by foreign ministers of the Group of Seven on Friday, saying that it disregarded facts, grossly interfered in China's internal affairs and maliciously smeared the country.

Dismissing the comments made by G7 foreign ministers, Zhao said China is an exemplary model of practicing the UN Charter and real multilateralism.

China has always been committed to promoting joint responses from the international community to global challenges, and it is dedicated to building a community with a shared future for mankind, he added.

He also noted that China's position on affairs concerning Taiwan, Xinjiang and Hong Kong is clear and consistent.

Zhao urged the G7 to stop clinging to a Cold War mentality and ideological prejudices, refrain from meddling in other countries' internal affairs and stop repeating lies and fallacies.

The G7 should stop provoking regional conflicts and creating bloc confrontation so as to create favorable conditions for global cooperation, he added.