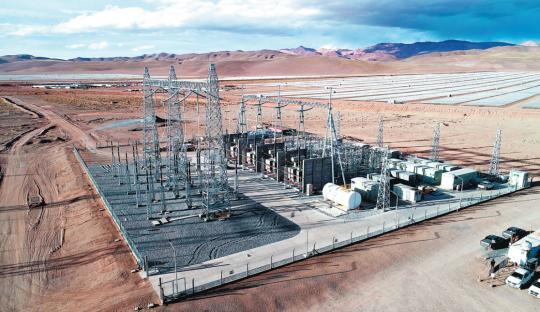 An aerial view of the Cauchari solar project in Argentina's Jujuy province, which was built by Chinese companies. (Photo/Xinhua)

China's outbound direct investment (ODI) surged 16.3 percent on a yearly basis to $178.82 billion in 2021, with the flow scale ranking third in the world for ten consecutive years, according to a government statistical bulletin released on Monday.

The country's ODI stock amounted to $2.79 trillion by the end of 2021, positioning it as the third among the largest investors in the global market for five consecutive years, said the 2021 Statistical Bulletin of China's Outward Foreign Direct Investment.

The report, jointly released by the Ministry of Commerce, the National Bureau of Statistics and the State Administration of Foreign Exchange, showed that China's influence in the world's investment market has continued to expand.

The report said that China's ODI structure continued to improve in 2021. The country's ODI covers 18 industrial categories, among which 80 percent of the investment went to leasing and business services, wholesale and retail, manufacturing, finance and transportation, all with flows exceeding $10 billion.

The ODI made by Chinese companies in countries and regions participating in the Belt and Road Initiative reached a record high of $24.15 billion in 2021, accounting for 13.5 percent of China's total ODI flow in the year.