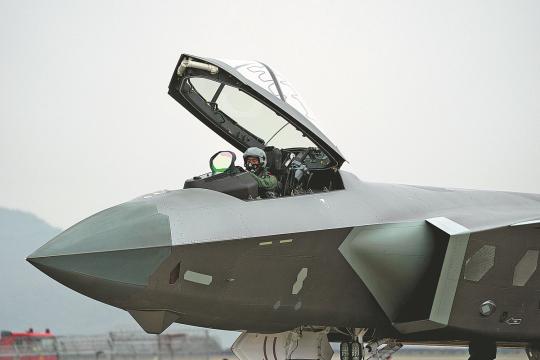 A pilot opens the cockpit of a J-20 stealth fighter jet at the venue of the Zhuhai Airshow on Saturday. （Photo by YUE SHUHUA/FOR CHINA DAILY）

The J-20 stealth fighter jet, China's top combat aircraft, is highly likely to be on public display on the ground for the first time after a pair of the planes landed at the site of a coming air show.

According to video clips and photos taken by separate sources, two J-20s, clad in the silver-gray paint of the People's Liberation Army Air Force, landed at the venue of the 14th China International Aviation and Aerospace Exhibition in Zhuhai, Guangdong province, on Saturday afternoon.

The exhibition, the largest air show in the nation, is scheduled to take place in Zhuhai from Tuesday to Sunday. It is more commonly called the Zhuhai Airshow.

It will be the first time for the J-20, one of the world's most advanced fighter jets, to appear publicly on the ground. The stealth fighter has carried out several flight performances at previous Zhuhai Airshows and has flown in military parades, but it has never been displayed so close to the public due to secrecy.

Wu Peixin, an aviation industry observer in Beijing, said the decision to display the J-20s on the ground represents the Chinese military's rising confidence, transparency and openness.

"If there were only a small number of J-20s delivered, I don't believe the PLA Air Force would send two of them to stay on-site at the air show for several days," he said, noting that the unprecedented openness may also hint that the nation's next-generation fighter jet project is advancing well.

China's first stealth combat aircraft, the J-20 was designed and manufactured by the Aviation Industry Corp of China and is widely deemed one of the best fighter jets ever built in modern history.

The plane conducted its maiden flight in January 2011 and was officially declassified in November 2016 when it staged a brief flight performance at the 11th Zhuhai Airshow. It was commissioned to the People Liberation Army's Air Force later that year, becoming the third stealth fighter jet in the world to enter service following the US' F-22 Raptor and F-35 Lightning II.

Military analysts said the aircraft has enabled the PLA Air Force to be capable of engaging any other top fighter jet and has substantially enhanced its operational capability.

The J-20 shoulders the heavy responsibility imposed by the PLA Air Force to make way for other aircraft in an air battle, according to Zhang Hao, a veteran pilot who has operated the combat plane for years.

"The J-20 will be like a needle that can penetrate and break down the enemy's (air-defense) network," he previously told China Central Television. "The plane is a typical offensive weapon. It has good stability, stealth capability, situational awareness capacity and fire-control systems."