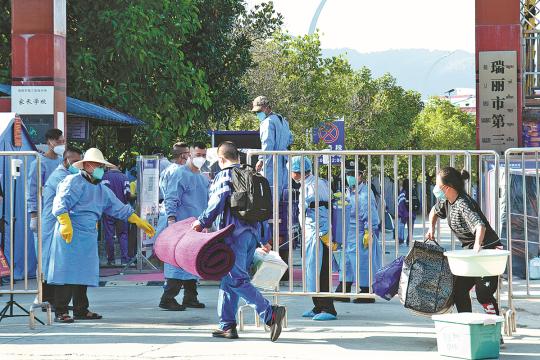 Second-year students of junior and senior high schools return to class in Ruili, Yunnan province, on Saturday. In-person classes have been frequently interrupted at the Chinese border city. (Photo/CHINA DAILY)

Health authority pledges to rectify measures that are oversimplified, excessive

China's health authority recently called for the quick rectification of irregular COVID-19 control practices, such as extending quarantine periods and imposing prolonged lockdowns, and vowed to hold those responsible for such actions accountable.

Tuo Jia, an official with the National Administration of Disease Prevention and Control, said on Saturday that antivirus measures should be resolute, scientific and precise, while any measures taken that oversimplify containment policies, adhere to a one-size-fits-all approach or impose additional restrictions should be prohibited and eradicated.

"Relevant authorities will promptly report such behavior, urge rectification and hold those who fail to fully implement the corrections accountable," she said during a news briefing.

The National Health Commission set up an online message board in late June for the public to submit malpractice complaints.

Tuo said that complaints filed since then mainly center on forcing people traveling from low-risk areas to return or undergo isolation, expanding travel restrictions to regions seeing no risk of the virus' spread and broadening ranges of at-risk personnel.

Such excessive policies have been observed in a number of cities, including those in Heilongjiang, Shanxi, Henan and Guangdong provinces.

Recently, some new violations have emerged, such as charging fees for centralized isolation facilities, imposing static management and widespread lockdowns, and changing the color codes of people's health apps to curb movement.

"We have attached great importance to looking into these problems and rectifying them," Tuo said.

The Zhengzhou government in Henan, which was singled out during the briefing for replacing targeted control measures with snap lockdowns, said on Saturday that the city will reflect on its behavior, make rectifications and prevent excessive disease control measures in the future.

An Wei, the city's Party chief, said that continued efforts should be devoted to restoring the normal lives of people in neighborhoods where the virus isn't present, while stepping up closed-loop management at schools, hospitals, elderly care centers and major enterprises to reduce the virus' impact on the economy.

He added that the designation of at-risk regions should be made according to the rules outlined in the latest and ninth guideline released by the State Council's Joint Prevention and Control Mechanism.

Heilongjiang's Daqing, which was censured for turning away or isolating travelers from low-risk areas, also announced plans to adjust its policy on Saturday evening, asking travelers from areas experiencing no new infections to take two tests within three days upon arrival rather than undergoing quarantine.

The mainland reported 526 local confirmed infections and 3,894 local asymptomatic infections on Saturday, according to the National Health Commission.

Hu Xiang, another official from the National Administration of Disease Prevention and Control, said that new daily infections are on the rise, fueled by the high transmissibility and stealthy spread of Omicron subvariants.

"Globally, a new wave of COVID-19 is approaching. In China, local outbreaks have rebounded as the risk of flu and other respiratory diseases grows," she said. "We must unswervingly abide by the dynamic zero-COVID strategy while upgrading our methods based on local experiences and the changing traits of the virus.

"Practice has proved that China's antivirus strategy is completely correct and the most effective and economical," Hu added.

He also urged seniors, especially those aged 80 and above, to get vaccinated as soon as possible.

As of Friday, China had fully vaccinated 90.2 percent of its total population, including 86.4 percent of its elderly population. However, the rate of primary vaccination and booster shots among people aged 80 and above needs to be further improved, the National Health Commission said.