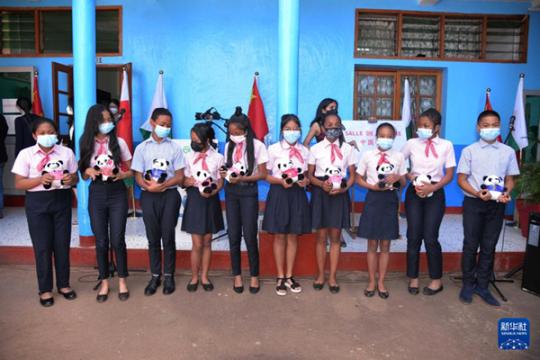 Students take a group photo in front of a reading room at Le Pitet Nid on the outskirts of Antananarivo, capital of Madagascar, on May 5. (Photo/Xinhua)

President Xi Jinping called on Sunday for China and Madagascar to keep enhancing bilateral friendship and cooperation as he exchanged congratulatory messages with Madagascan President Andry Rajoelina on the 50th anniversary of the establishment of bilateral diplomatic relations.

In the message, Xi said ties between China and Madagascar have always maintained healthy and stable development despite changes in the global landscape over the past 50 years.

Xi said he attached great importance to ties with the African nation, adding that he is willing to work with Rajoelina to use the 50th anniversary as an opportunity to deliver more benefits to both nations and their peoples.

Rajoelina hailed the in-depth development and fruitful outcomes of bilateral friendship and cooperation over the past 50 years, saying that sincere friendship, mutual respect and trust and support for each other has become the prominent feature in the bilateral comprehensive cooperative partnership.

Madagascar is willing to make joint efforts with China to stay committed to the building of an even closer community with a shared future between the two sides, he said.