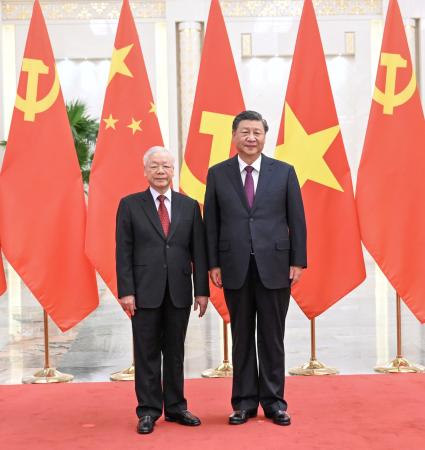 China and Vietnam have agreed to consolidate their traditional friendship, strengthen the strategic communication between them, enhance political mutual trust and properly handle their differences in order to constantly take their comprehensive strategic cooperative partnership in the new era to a new level.

During their talks on Monday at the Great Hall of the People in Beijing, Xi Jinping, general secretary of the Communist Party of China Central Committee, and Nguyen Phu Trong, general secretary of the Communist Party of Vietnam Central Committee, vowed to not allow anyone, any forces or the South China Sea issue to undermine the ties between the two parties and the two countries.

Trong, who started his three-day official visit to China on Sunday, is the first foreign leader Xi has received since the conclusion of the 20th CPC National Congress, which elected the 20th CPC Central Committee with Xi at the core.

Xi, who is also China's president, briefed the Vietnamese leader about the 20th CPC National Congress. He said that the two parties should seek happiness for the people and progress for humanity and jointly cope with the complex international environment and grave risks and challenges.

Both parties should also make all-around efforts to advance socialist modernization, and by no means allow anyone to disturb the countries' steps for progress or allow any forces to shake the foundation of their development systems, Xi said.

Trong congratulated Xi on the success of the 20th CPC National Congress and his reelection as general secretary of the CPC Central Committee. He also said his Beijing trip had enabled him to honor his commitment to Xi about choosing China as the destination of his first overseas visit after he was reelected as general secretary of the Communist Party of Vietnam Central Committee in 2021.

He said that Vietnam attaches great importance to the development of relations with China and gives top priority to strengthening friendly cooperation with the country.

Vietnam adheres to the one-China principle, resolutely opposes "Taiwan independence" secessionist activities in any form, and will not develop any official relationship with the Taiwan region, Trong said.

He assured Xi that Vietnam will not allow any country to establish military bases on its territory, will not join in any military alliances, will not target any country with armed forces, and will not work together with one country to oppose another.

During their talks, the two leaders exchanged views about promoting bilateral ties and regional peace, development and cooperation under the framework of the Association of Southeast Asian Nations.

Xi called on the leaderships of both parties to strengthen communication and exchange views in a timely manner about major issues in their bilateral ties. In the new circumstances, he said, the two parties should boost exchanges and mutual learning about governance experiences.

Xi underlined the need to maintain communication and strategic dialogue between the countries' high-ranking military officers, expand results of the countries' law enforcement and security cooperation, and safeguard their own political security and social stability.

China stands ready to work with Vietnam to step up synergies between their development strategies, push for mutual connectivity and jointly secure the stability of industrial and supply chains, he said.

China is willing to work with ASEAN to uphold true multilateralism, adhere to open regionalism and promote the regional landscape and international order toward peace, stability, fairness and justice, he said.

Before their talks, Xi gave Trong a grand welcoming ceremony. After their talks, the two leaders also viewed the documents that the two countries signed regarding cooperation in fields including political parties, economy and trade, environmental protection, customs and tourism.