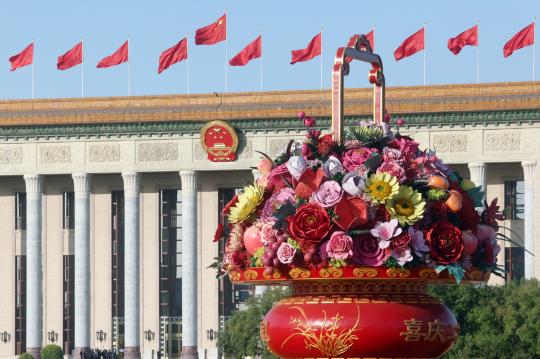 This photo taken on Oct 16, 2022 shows the Great Hall of the People in Beijing, capital of China. (Photo/Xinhua)

A senior Party official said on Sunday that efforts should be made to publicize the spirit of the 20th National Congress of the Communist Party of China to build consensus and unity in action for building a modern socialist country in all respects.

Cai Qi, a member of the Standing Committee of the Political Bureau of the CPC Central Committee, made the remark at a meeting on publicizing the spirit of the congress, which concluded in Beijing on Oct 22.

Cai, who is also a member of the CPC Central Committee Secretariat, said publicity teams should explain clearly the theme of the congress and the remarkable changes that have taken place over the past decade.

They should explain clearly the Chinese path to modernization, the requirements set by the congress for the Party and the country, and the indomitable fighting spirit for addressing risks and challenges, he said.

Cai also said those who take part in the publicity work should publicize the spirit in a comprehensive and comprehensible way.

According to a decision of the CPC Central Committee released on Sunday, the Party will launch a major campaign on the study, promotion and implementation of the spirit of the 20th CPC National Congress, which is the prime political task of the entire Party at present and also in the future.

The document summarized the essence of the congress and made detailed requirements for Party members and organizations during the campaign.

Textbooks will also be compiled, said the document dated Oct 29.

A series of campaign activities will be carried out across the country from now through the beginning of next year, and publicity projects for non-Party members will also be conducted to help them understand the spirit of the Party congress, it said.

The use of new media and online interaction were highlighted.