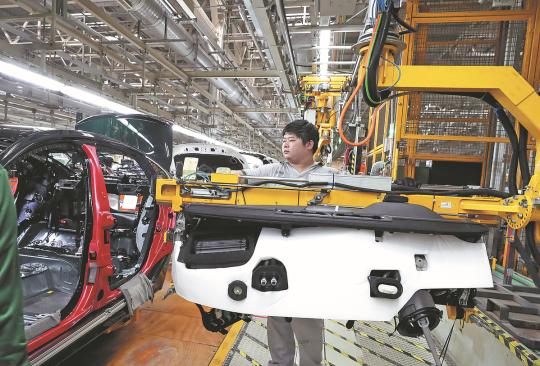 An employee works on the production line of an automaker in Changshu, Jiangsu province. (HUA XUEGEN/FOR CHINA DAILY)

China's structural transformation, which takes the economic transition as the mainstay, will lay a solid foundation for the country's high-quality development and inject strong impetus into global economic growth, according to experts attending the 88th International Forum on China Reform in Haikou, the capital of Hainan province.

High-quality development is the top priority of building a modern socialist country in all respects, said Kuang Xianming, deputy head of the Hainan-based China Institute for Reform and Development. China is at a critical juncture in its structural transformation and upgrading, a process that is playing an indispensable role in fostering high-quality development, he said.

The country should deepen the market-oriented reform of production factors, break monopolies in the service sector, establish a unified domestic market, improve intellectual property protection, and promote the reform of the education system in order to push forward structural transformation, Kuang said.

More efforts should be made to advance high-level opening-up, he said, with an emphasis on further opening the market in fields such as advanced manufacturing and services, and bolstering international cooperation in scientific and technological innovation.

China's structural transformation, a profound change in the economic sector, is expected to continuously unleash the domestic economy's growth potential and serve as an important driving force for global economic development, he added.

China's contribution to global economic growth averaged 38.6 percent from 2013 to 2021, according to the World Bank data, making it the largest contributor.

Fan Gang, president of the China Development Institute, a Shenzhen-based think tank, called for efforts to give full play to the innovative vitality of private businesses, and strengthen enterprises' core position in technological innovation as part of a broader drive to enhance China's independent innovation capacity and overcome bottlenecks.

China's innovation capabilities have grown significantly. The nation moved up to 11th place on the World Intellectual Property Organization's Global Innovation Index 2022, which was 23 places higher than its 2012 ranking.

"To foster a new development pattern, we need to combine expanding domestic demand with deepening supply-side structural reform, which is a very significant strategic task in the next step," Zhang Zhanbin, head of the School of Marxism at the Party School of the Central Committee of the Communist Party of China, also known as the National Academy of Governance.

Zhang said the country should increase its total factor productivity, improve its scientific and technological innovation mechanism, promote the integration of the digital economy with real economy and gain a competitive edge in digital technologies globally.

It is also important to safeguard the security of industrial and supply chains and achieve breakthroughs in core technologies, considering the escalating geopolitical tensions and fallout from the COVID-19 pandemic, he said.

Liu Xinghua, director of the Chinese Center for Economic and Financial Studies of the China Institute for Innovation and Development Strategy, stressed the need to build a high-standard socialist market economy and improve the efficient technological innovation system to further stimulate the vitality of the economy through deepening reform and opening-up.