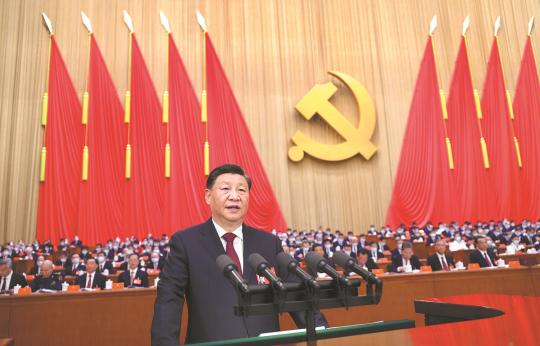 Xi Jinping delivers a report to the 20th National Congress of the Communist Party of China on behalf of the 19th CPC Central Committee at the Great Hall of the People in Beijing on Sunday. (JU PENG/XINHUA)

The Communist Party of China has vowed to comprehensively advance national rejuvenation through a Chinese path to modernization, a central task the Party laid out for the next five years and beyond at the 20th CPC National Congress, which opened in Beijing on Sunday.

While delivering a report at the opening session of the congress on behalf of the 19th CPC Central Committee, Xi Jinping stressed the need to coordinate development and security, and he highlighted safeguarding national security and social stability in the course of promoting sustained growth.

"From this day forward, the central task of the CPC will be to lead the Chinese people of all ethnic groups in a concerted effort to realize the Second Centenary Goal of building China into a great modern socialist country in all respects and to advance the rejuvenation of the Chinese nation on all fronts through a Chinese path to modernization," Xi said.

He said that the next five years will be crucial for getting the efforts to build a modern socialist country in all respects off to a good start.

In a two-step development strategy, the CPC aims to basically realize socialist modernization by 2035, and then build China into a great modern socialist country that is prosperous, strong, democratic, culturally advanced, harmonious and beautiful by the middle of this century.

Xi said that China aims to lead the world in composite national strength and international influence by the middle of this century. He set out the major principles in the nation's endeavor to build a modern socialist China in all respects.

"On the journey ahead, we must firmly adhere to the major principles of upholding and strengthening the Party's overall leadership, following the path of socialism with Chinese characteristics, applying a people-centered development philosophy, remaining committed to deepening reform and opening-up, as well as carrying forward our fighting spirit," he said.

In analyzing the environment for the country's development, Xi said that China has entered a period of development in which strategic opportunities, risks and challenges are concurrent and uncertainties and unforeseen factors are rising.

Warning of various unpredictable dangerous events ("black swans") and foreseeable but unaddressed dangers ("gray rhinos") that may occur at any time, he urged Party members to be more mindful of potential dangers, be prepared to deal with worst-case scenarios, and be ready to "withstand high winds, choppy waters, and even dangerous storms".

He urged the whole Party to meet obstacles and difficulties head on, ensure both development and security, and prepare well to surmount difficulties and challenges on the road ahead. 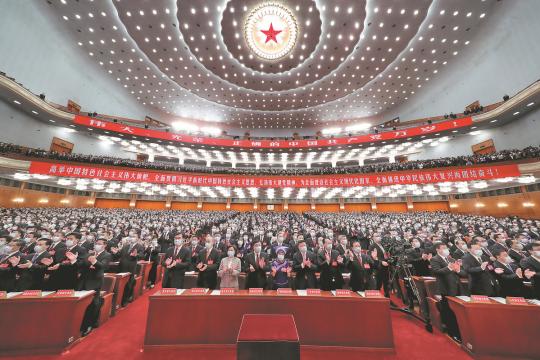 Delegates applaud as the opening session of the 20th National Congress of the CPC starts on Sunday. (YAO DAWEI/XINHUA)

Speaking of China's development in the new era since the 18th CPC National Congress in 2012, Xi said that the past decade marked three major events of profound historical significance for the cause of the Party and the people.

"We embraced the centenary of the Communist Party of China; we ushered in a new era of socialism with Chinese characteristics; and we eradicated absolute poverty and finished building a moderately prosperous society in all respects," he said.

The country continues to be the world's second-largest economy, ranks first in the world in terms of grain output, and its manufacturing sector is the largest in the world, as are its foreign exchange reserves, he said.

Xi also talked about China's response to the COVID-19 pandemic, including its pursuing of the dynamic zero-COVID policy. He said that "we have protected the people's health and safety to the greatest extent possible and made tremendously encouraging achievements in both epidemic response and economic and social development".

"As we fully affirm the remarkable achievements we have made in the cause of the Party and the country, we must not lose sight of the shortcomings in our work and the many difficulties and problems confronting us," Xi said.

He set out a list of issues to be addressed in the coming years, including unbalanced and inadequate development nationwide, bottlenecks hindering high-quality development, and strengthening China's capacity for scientific and technological innovation, as well as major issues to be resolved in order to guard against financial risks and ensure that food, energy, and industrial and supply chains are secure and reliable.