Parties from around world laud congress 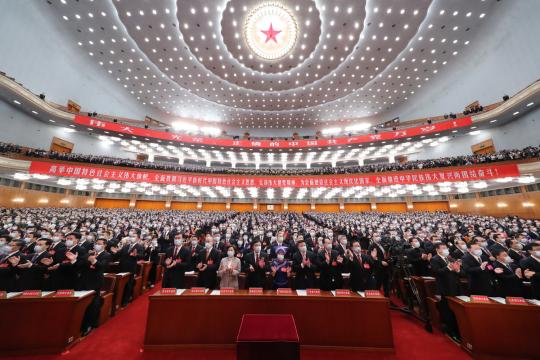 The Communist Party of China opens its 20th national congress at the Great Hall of the People in Beijing, Oct 16, 2022. [Photo/Xinhua]

The ruling parties of the Democratic People's Republic of Korea, Vietnam, Laos and Cuba have sent their congratulations to the Communist Party of China on the opening of the 20th CPC National Congress.

In its congratulatory letter, the Central Committee of the Workers' Party of Korea said China's achievements have demonstrated that the Chinese people, who rally around the CPC, cannot be held back when they march forward on a path guided by Xi Jinping Thought on Socialism with Chinese Characteristics for a New Era.

The Central Committee of the Communist Party of Vietnam said that as the comrade and brother of China, the CPV firmly believes that the 20th National Congress will put forward a series of major guidelines and policies that anchor the direction for China to achieve its goal of realizing socialist modernization from 2020 through 2035.

Noting that China's historic achievements have set a model of success for Laos and other developing countries, the Central Committee of the Lao People's Revolutionary Party said it believes that the CPC, the Chinese government and the Chinese people will certainly achieve greater progress on the new journey and realize the great national rejuvenation.

In its congratulatory message, the Central Committee of the Communist Party of Cuba said that the CPC has made China a leader in global innovation and praised China for proposing the Belt and Road Initiative, the Global Development Initiative and the Global Security Initiative.

Political leaders and friends around the world also sent congratulations to the CPC Central Committee and Xi Jinping on the opening of the 20th CPC National Congress.

Cyril Ramaphosa, president of South Africa as well as of the African National Congress, said he expects the congress to achieve constructive results that will help the CPC to develop and grow stronger.

Argentine President Alberto Fernandez, also president of the country's Justicialist Party, said that under the leadership of Xi, the CPC has made remarkable achievements in such areas as poverty alleviation, scientific and technological innovation, and the fight against the COVID-19 pandemic.

Tajik President Emomali Rahmon, who is also president of the country's People's Democratic Party, said it is under the CPC's leadership that the friendly Chinese people have made remarkable achievements in the process of socioeconomic development and national modernization.