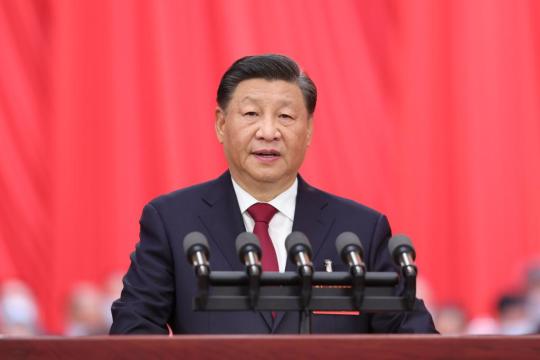 Xi Jinping delivers a report to the 20th National Congress of the Communist Party of China (CPC) on behalf of the 19th CPC Central Committee at the Great Hall of the People in Beijing, Oct 16, 2022. The 20th CPC National Congress opened on Sunday. (Photo/Xinhua)

The 20th National Congress of the Communist Party of China convened in Beijing on Sunday. In the report Xi Jinping delivered at the opening session, he objectively summarized the progress of the Party and the nation over the past five years and the past 10 years of the new era, and provided a guideline for their joint development in the foreseeable future.

In doing so, he ushered the country onto the next stage of its journey of rejuvenation, setting the country's sights firmly on the goal of building China into a great modern socialist country in all respects.

Over the past 10 decade, under the leadership of the CPC Central Committee, with Xi at its core, the nation has stayed united and responded effectively to the momentous challenges it has faced.

Today, although the world has entered a new period of turbulence and change, the nation can forge ahead with confidence and determination knowing that it is on the right road and that under the leadership of the Party it can secure new successes.

The path and development philosophy that have enabled China to weather the storm of COVID-19 and resist external attempts to blackmail, contain, blockade and exert maximum pressure on the country are crystallized in Xi Jinping Thought on Socialism with Chinese Characteristics for a New Era.

Characterized by the awareness that all things are interrelated and a problem-oriented approach that always puts people's interests first, the Thought upholds fundamental principles while breaking new ground. It firmly safeguards the dignity and core interests of the country, while keeping it well-positioned to navigate its ongoing profound transformation.

While China's transformation contains elements that are common to the modernization processes of all nations, it has features that are unique to the Chinese context. But these endow it with global significance as it offers Chinese wisdom and solutions gained from the experience of exploration and practice.

China's modernization is a task of unparalleled difficulty and complexity, as it involves a huge population, 1.4 billion, a number that is larger than the combined population of all developed economies in the world today. It is a task that can only be realized by fostering a firmer sense of purpose, fortitude and self-belief in pursuing high-quality development.

That said, China will never yield to any external coercion, containment or bullying that aims to derail its development. Meanwhile, it will unswervingly expand its opening-up and contribute to the common development of less-developed countries to make the international order fairer.

It should be noted that, fundamentally different from Western political parties that represent special interests, the CPC has always dedicated itself to securing better lives for the Chinese people.

Despite vicissitudes, it always remains resolutely committed to the cause of peace and development for humanity. That explains the perseverance and determination it has demonstrated in contributing to world development and fighting against headwinds and side winds.