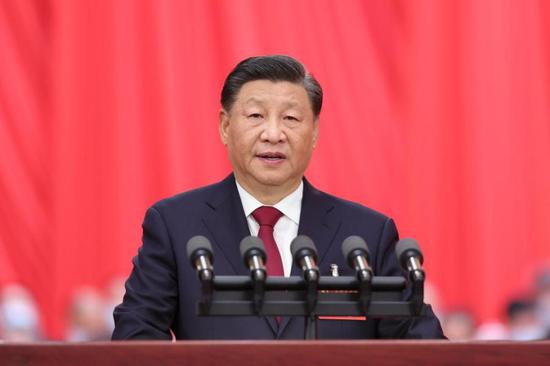 Xi Jinping delivers a report to the 20th National Congress of the Communist Party of China (CPC) on behalf of the 19th CPC Central Committee at the Great Hall of the People in Beijing, capital of China, Oct. 16, 2022. The 20th CPC National Congress opened on Sunday. (Xinhua/Rao Aimin)

Xi Jinping on Sunday pledged to improve the people's wellbeing and raise quality of life at the opening session of the 20th National Congress of the Communist Party of China (CPC).

"This country is its people; the people are the country. As the CPC has led the people in fighting to establish and develop the People's Republic, it has really been fighting for their support," Xi said.

Bringing benefit to the people is the fundamental principle of governance, Xi said, noting that working for the people's wellbeing is an essential part of the Party's commitment to serving the public good and exercising governance for the people.

"We must ensure and improve the people's wellbeing in the course of pursuing development and encourage everyone to work hard together to meet the people's aspirations for a better life," Xi said.

The CPC will work hard to resolve the pressing difficulties and problems that concern the people most, improve the basic public service system to raise public service standards and make public services more balanced and accessible, so as to achieve solid progress in promoting common prosperity, according to Xi.

China will improve the system of income distribution, Xi said.

"We will ensure more pay for more work and encourage people to achieve prosperity through hard work," Xi said. "We will promote equality of opportunity, increase the incomes of low-income earners, and expand the size of the middle-income group," Xi said.

China will do more to help those in difficulty find employment and meet their basic needs, and improve the social security system with expanded coverage of social insurance programs, Xi said.

The country will move faster to build a housing system featuring multiple suppliers and various channels of support that encourages both housing rentals and purchases, Xi said.

In an effort to advance the Healthy China Initiative, China will establish a policy system to boost birth rates, pursue a proactive national strategy in response to population aging, and promote the preservation and innovative development of traditional Chinese medicine, Xi said.

The public health system will also be improved, with strengthened systems for epidemic prevention, control, and treatment as well as emergency response capacity so as to effectively contain major infectious diseases, Xi said.