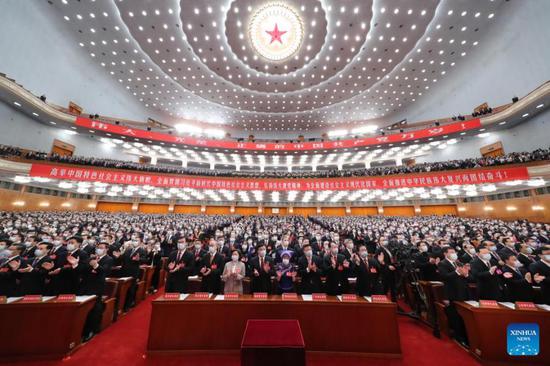 The 20th National Congress of the Communist Party of China (CPC) opens at the Great Hall of the People in Beijing, capital of China, Oct. 16, 2022. (Xinhua/Yao Dawei)

Xi Jinping called for advancing the Beautiful China Initiative at the opening session of the 20th National Congress of the Communist Party of China on Sunday.

Respecting, adapting to, and protecting nature is essential for building China into a modern socialist country in all respects, he said.

Xi demanded a holistic and systematic approach to the conservation and improvement of mountains, waters, forests, farmlands, grasslands, and deserts.

China will prioritize ecological protection, conserve resources and use them efficiently, and pursue green and low-carbon development, Xi said.

Xi pledged to generally eliminate serious air pollution, as well as black, malodorous water bodies in cities. Prevention and control of soil contamination at the source will be strengthened.

China will work actively and prudently toward the goals of reaching peak carbon emissions and carbon neutrality, Xi said.

"Based on China's energy and resource endowment, we will advance initiatives to reach peak carbon emissions in a well-planned and phased way in line with the principle of building the new before discarding the old," Xi said.

Coal will be used in a cleaner and more efficient way, and the planning and development of a system for new energy sources will be sped up, Xi said, noting that China will get actively involved in global governance in response to climate change.