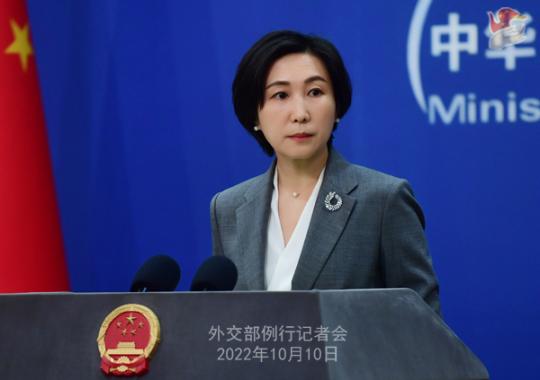 China will create a vast space for peaceful reunification, but will never leave any space for "Taiwan independence" separatist moves, a Foreign Ministry spokeswoman said.

The Taiwan question concerns China's sovereignty and territorial integrity, and Taiwan is an inseparable part of China's territory, Foreign Ministry spokeswoman Mao Ning said at a daily news conference on Monday, commenting on remarks made by Taiwan leader Tsai Ing-wen.

Tsai said in a speech on Monday that there is "no room for compromise" over the island's "sovereignty" and "democratic way of life", according to AFP.

Such moves have seriously undermined the important foundation for the peaceful development of cross-Straits relations, Mao said.

The one-China principle is what underpins peace and stability across the Straits, Mao pointed out. Cross-Straits relations will improve and develop if the principle is followed, she said, adding that turning away from the principle will lead to tensions and turmoil in the relations.

Tensions across the Straits have heightened since the United States House Speaker Nancy Pelosi paid a visit to the Taiwan region in August in spite of China's repeated warnings, prompting China's military exercises around the island.