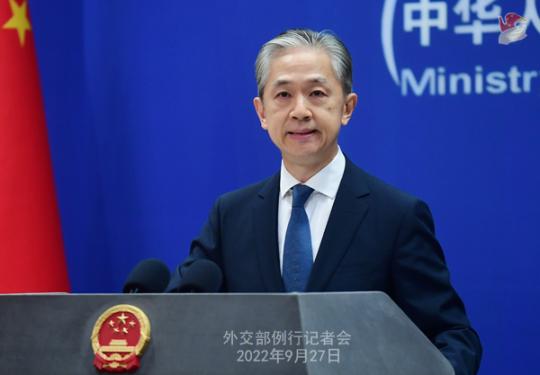 A Foreign Ministry spokesman criticized a handful of Western countries on Tuesday for practicing double standards and political maneuvers on human rights issues, saying it is crystal clear to the international community that these countries attempt to use human rights issues to interfere in China's domestic affairs.

"Whatever stunt these few Western countries pull, they will never stop the Chinese people's solid steps toward development and progress," ministry spokesman Wang Wenbin said at a regular news briefing in Beijing.

The remarks came after nearly 70 countries expressed opposition to interference in China's internal affairs under the pretext of human rights and underscored their respect for the right of the people of each state to independently choose their own path for development.

Pakistan expressed in a joint statement on behalf of 68 countries on Monday at the 51st session of the United Nations Human Rights Council that issues related to Xinjiang, Hong Kong and Tibet are China's internal affairs and there should be no politicization of human rights and double standards.

In addition to that statement, Wang said, representatives from more than 20 countries also spoke out separately to support China.

It was not the first time that countries have spoken out for justice on such an occasion. In recent years, nearly 100 countries, including Muslim countries, have expressed understanding and support in various ways for China's legitimate positions at the UN Human Rights Council and at other public occasions.

"The attempt by a few Western countries to use human rights as a pretext to smear and attack China has been thwarted, and this clearly shows the attitude of the international community," Wang said.

The spokesman also noted the serious human rights problems existing in the United States and a few other Western countries, ranging from the violation of the right to life caused by gun violence to the persistent systemic racial discrimination that infringes on the human rights of minority groups.

According to the statistical website Gun Violence Archive, since the beginning of this year, nearly 21,000 people have died in the US due to gun violence and 279 mass shootings have taken place in the country, in each of which four or more people were killed or injured.

"We urge these countries to stop acting as 'condescending lecturers' and manage well their own business," Wang said.