Letter from space sends Hong Kong student over the moon 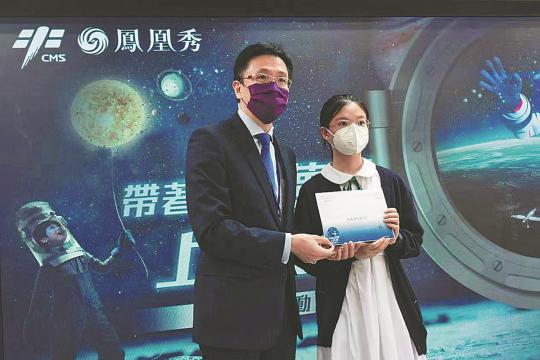 Hong Kong student Chen Man-lin, 15, receives a letter of reply from Chen Dong, an astronaut aboard the Tiangong space station, on July 19. The letter was delivered and handed to the student by Hong Kong Secretary for Innovation, Technology and Industry Sun Dong. (CHINA DAILY)

Most people remember the excitement of receiving the first letter from their pen pal. The beauty of the letter is the anticipation, the waiting and the curiosity of what is in the note.

Chen Man-lin, a 15-year-old Hong Kong student, was over the moon. Her pen pal was orbiting in the Tiangong Space Station when he wrote inspiring words to her.

Chen, a Form 3 student, or ninth-grader, at Pui Kiu Middle School in North Point, Hong Kong, learned in June about a national campaign of writing to astronauts in the Tiangong space station in a campaign called "Bring my dream to Tiangong".

She drafted an outline of her letter that evening and detailed every moment of her planned journey and how she gradually got to know what astronauts do and about the nation's aerospace development program.

It was not done on impulse. The seed was planted back when Chen was 6-years-old. She had watched a live broadcast of a science lecture by female astronaut Wang Yaping, which was beamed back from space in 2013.

Over 60 million primary and middle school students watched the class. The scene of floating water balls and spinning tops, experiments performed by Wang in space to demonstrate the concepts of weight and mass in a zero-gravity environment, captured the heart of Chen and many other youngsters.

Since then, Chen has paid special attention to news and developments in aerospace. She put her passion for space into writing, along with her frustration and doubts about her studies and making choices in life.

A three-page letter of reply arrived in about a month.

Shenzhou XIV astronaut Chen Dong responded to the student. Chen Man-lin was one of the 30,000 students from all over China who took part in the campaign and became the only one chosen in Hong Kong to receive a letter sent from space.

Her school threw a big party on July 19, when Secretary for Innovation, Technology and Industry Sun Dong hand delivered the letter of reply.