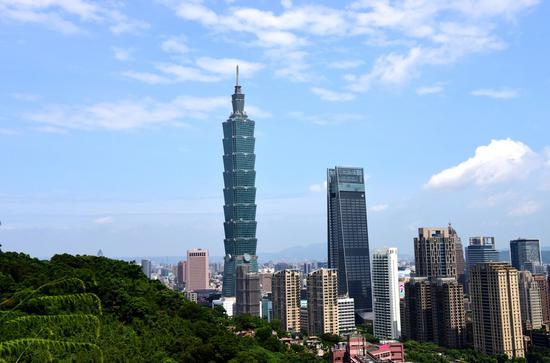 Beijing on Tuesday voiced strong condemnation over and firm opposition to United States House Speaker Nancy Pelosi's visit to Taiwan, a provocative move that China criticized as a gross violation of the country's sovereignty and territorial integrity.

China firmly opposes and sternly condemns Pelosi's visit, and has made serious diplomatic representations and strong protests to the U.S., the Foreign Ministry said a statement issued shortly after Pelosi's arrival in Taipei.

The statement said that since Pelosi is a leader in the U.S. Congress, her visit to and activities in Taiwan, in whatever form and for whatever reason, are a major political provocation in order to upgrade U.S. official exchanges with Taiwan.

"This is a serious violation of the one-China principle and the provisions of the three China-U.S. joint communiques. It has a severe impact on the political foundation of China-U.S. relations, and seriously infringes upon China's sovereignty and territorial integrity. It gravely undermines peace and stability across the Taiwan Straits, and sends a seriously wrong signal to the separatist forces for 'Taiwan independence'."

China absolutely does not accept this, and the Chinese people absolutely reject this, the statement said.

Noting that the Taiwan question is the most important and sensitive issue at the very heart of China-U.S. relations, the statement said the fundamental cause of the new round of tension and the grave challenge confronting the Taiwan Straits are the repeated moves by the Taiwan authorities and the United States to change the status quo.

China will take all necessary measures to resolutely safeguard its sovereignty and territorial integrity, the statement said, and Washington and "Taiwan independence" forces will be responsible for all of the consequences.

Pelosi, who is second in line to the U.S. presidency, made the highest-level visit in 25 years by a U.S. government official to Taiwan, an inalienable part of Chinese territory. Her provocative trip came amid rising tensions between China and the U.S. as bilateral ties have deteriorated in recent years.

China had issued stern warnings against her visit to the island. During a phone conversation with U.S. President Joe Biden last week, President Xi Jinping said that China firmly opposes separatist moves toward "Taiwan independence" and interference by external forces, and never allows any room for "Taiwan independence" forces in whatever form. "Those who play with fire will perish by it," Xi said.

In the China-U.S. Joint Communique on the Establishment of Diplomatic Relations in 1979, the U.S. government made a clear commitment to the one-China principle as well as not developing official relations with Taiwan.

State Councilor and Foreign Minister Wang Yi said on Tuesday that the one-China principle is the consensus of the international community, the political foundation for China's ties with other countries, the core of China's key interests, and a red line and bottom line that cannot be crossed.

Some people in the U.S. are constantly challenging China's sovereignty and deliberately stirring up trouble across the Taiwan Straits, Wang said during an interview after attending the Shanghai Cooperation Organization Foreign Ministers' Meeting. China will never accept such moves, he said.

He warned that some U.S. politicians "play with fire" on the Taiwan question and there will never be a good ending for them. Washington is behaving like a bully, which makes the international community realize that the U.S. is the biggest peace breaker in the world, he added.

A spokesperson for the Standing Committee of the National People's Congress, the nation's top legislature, condemned Pelosi's visit on Tuesday, saying that any attempt to disrupt China's complete reunification and national rejuvenation is doomed to fail.

The nation's Anti-Secession Law has clear stipulations about the major questions with regard to upholding the one-China principle, containing "Taiwan independence" secessionist activities and opposing external forces interfering in the Taiwan question, the spokesperson said.

The Foreign Affairs Committee of the National Committee of the Chinese People's Political Consultative Conference said in a statement that Pelosi's visit to Taiwan is a major political provocation toward China. China must be and will be reunified and reunification is an irresistible historical trend, it said.

The Taiwan Work Office of the Communist Party of China Central Committee said in a statement that the secessionist activities of Taiwan's Democratic Progressive Party and its collusion with the U.S. to sell out national interests will only push the island into an abyss of disaster and bring great harm to Taiwan compatriots.

Whatever Pelosi and her peers do in supporting "Taiwan independence" and containing China, they will by no means stop the historical process of China's reunification, the statement said.

In a Washington Post opinion piece published on Tuesday after she arrived in Taiwan, Pelosi said that the U.S. must remember its vow "to support the defense of Taiwan".

Speaking at a regular news conference on Tuesday, Foreign Ministry spokeswoman Hua Chunying said Pelosi's visit to Taiwan, in whatever pretext, is foolish, dangerous and unnecessary. She said that the U.S. must accept all responsibility for this provocation, which will lead to the escalation of tensions across the Taiwan Straits.

Calling Pelosi's visit a dangerous gamble, Hua said it is hard to imagine anything more reckless and provocative.

"The misjudgment or mishandling of the cross-Straits situation by the U.S. side will lead to disastrous consequences for not only the Taiwan region, but also the security, prosperity and order of the entire world," Hua said.

Any countermeasure adopted by China will be justified and necessary given Washington's unscrupulous behavior and its ignoring of China's repeated opposition, Hua said, adding that China is only exercising the right to which any independent sovereign country is entitled.

Chinese stocks tumbled on Tuesday ahead of Pelosi's visit to Taiwan, with the benchmark Shanghai Composite index down 2.26 percent at 3,186.37 points, as investors fretted over the tensions between Beijing and Washington surrounding her trip.

Hong Kong's Hang Seng Index fell more than 3 percent, while Taiwan's Taiex index was down 1.9 percent in early trading before recouping some losses.

Also on Tuesday, a spokesperson for the Chinese Mission to the European Union said that 181 countries in the world, including the U.S., have established diplomatic relations with China on the basis of the one-China principle.

The spokesperson urged other countries to respect China's core interest and major concerns, abide by the one-China principle, be prudent on the Taiwan question in both words and deeds, and not support the wrong strategy of a certain country in trying to contain China with the Taiwan question.

In response to a comparison of Pelosi's visit with the one by then-U.S. House Speaker Newt Gingrich in 1997, Zhang Jun, China's permanent representative to the United Nations, said on Monday that "a previous mistake does not make the following mistake legitimate".

"In recent years, due to the influence of some external forces, the situation in Taiwan has changed for the worse, and the 'Taiwan independence' elements are moving along on the wrong path. Without prompt containment measures against them, the situation may risk losing control," Zhang said at a news conference in New York.

Martin Jacques, a former senior fellow at the Department of Politics and International Studies at Cambridge University, said a visit by Pelosi to Taiwan would raise the bar of provocation toward China. "It will serve only to raise tensions, increase suspicions and heighten the danger of a military conflict," Jacques wrote in an opinion piece published by Global Times.

As the relationship between China and the U.S. becomes increasingly unpredictable, Taiwan has become by far the most dangerous source of tension and conflict, Jacques wrote, adding that the two countries need to reaffirm the basic principles of their long-held and shared understanding over Taiwan.