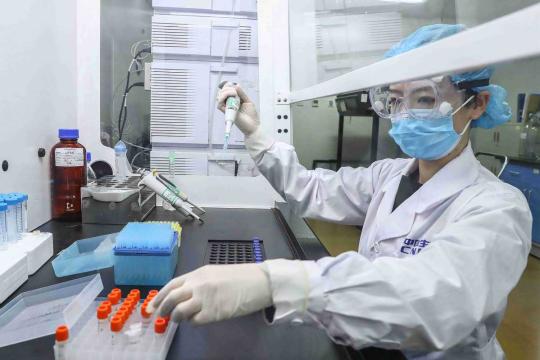 A technician tests a sample of a vaccine for COVID-19 at China National Pharmaceutical Group Co in Beijing. (Photo/Xinhua)

Trust levels in science and scientists have been discovered to be highest among Chinese in a global survey on the state of science released on Monday by conglomerate 3M.

Around 97 percent of correspondents in China said they trust in science, compared with the global 90 percent, while 92 percent expressed that they want to hear more from scientists about their work (versus 83 percent globally), according to the 2022 3M State of Science Index.

The survey, conducted between September and December last year, polled 1,000 adults in 17 countries including Australia, Brazil, France, India and the United States on everything from general perceptions on science to science education and career opportunities.

"Science and scientists share high prestige in China, even during the post-pandemic period, and this bodes well for the future" said Jack Xiong, head of R&D operations for 3M China. "Over 90 percent of Chinese citizens agree that, in the future, they will be more dependent on scientific knowledge than ever before, and are excited about future innovations, including artificial intelligence and automobility."

Majority of the respondents in China believe there are negative consequences for a society if its people do not value science (92 percent versus 83 percent globally). If people cannot trust news stories about science, there will be consequences, including public health crises, wider divisions within society and increased severity in climate change.

About 94 percent of Chinese respondents agree that the workforce requires more skilled trade workers. A majority of them think that vocational or trade schools can give them the needed education to have a successful career.