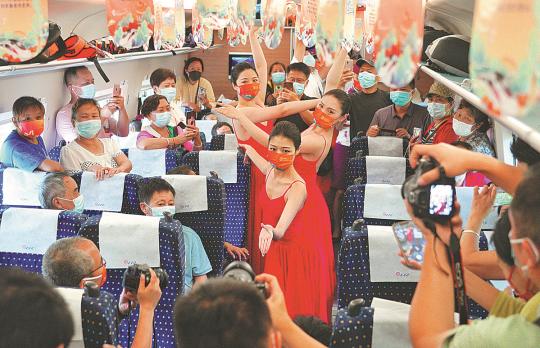 Train attendants perform for passengers on the Zhengzhou-Chongqing High-speed Railway on Monday, the day that the line is put into service. (CUI LI/FOR CHINA DAILY)

In just four hours and 23 minutes, the first group of passengers from Southwest China's Chongqing sped 1,068 kilometers through the bellies of numerous mountains and across multiple rivers to arrive at Zhengzhou in central Henan province on Monday at noon.

The newly built Zhengzhou-Chongqing railway, which has a designed speed of 250 km per hour to 350 km/h, cuts travel time between the cities in half. The time it takes to travel from Beijing to Chongqing has fallen to six hours and 46 minutes, and the time from Wuhan to Chongqing was reduced to four hours and 57 minutes.

"I feel so excited that the line has finally opened!" said Zhang Shengli, 37, a passenger on the G52 Fuxing bullet train from Chongqing to Beijing that marked the official opening of the line.

He said he travels between Beijing, Chongqing, Zhengzhou and Chengdu for work, and the new route will save him a lot of time.

The line that connects Henan and Hubei provinces and Chongqing will enhance travel between central and western parts of China, where economic development has been hindered by poor transportation infrastructure due to challenging terrain.

It is the first mountain high-speed railway in China with a bridge and tunnel ratio of 98 percent in its Xiangyang-Wanzhou section, including 91 new bridges and 57 tunnels, according to China Railway.

The Xiangyang to Wanzhou section is located in the mountainous areas of western Hubei and eastern Chongqing. It crosses Qinba, Wushan and the Qiyue mountains, spans the Hanshui, Daning and Meixi rivers, and passes through Shennongjia Nature Reserve.

"Taking the Zhengzhou-Chongqing line is like riding on an underground high-speed rail, because most of the time the passengers travel in the darkness through tunnels and bridges," Liu Xiongwei, the designer of the tunnels in the Hubei section, told local media.