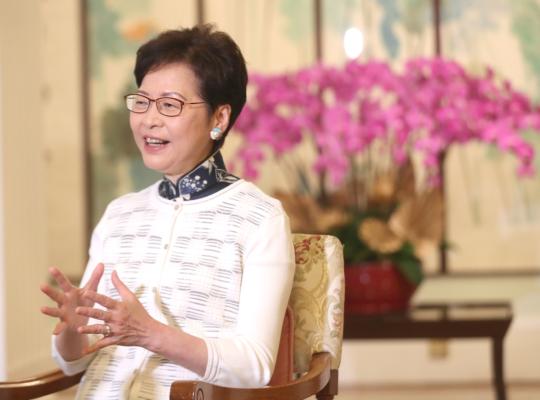 Hong Kong Special Administrative Region Chief Executive Carrie Lam Cheng Yuet-ngor said she is more optimistic about the future of Hong Kong because it has been brought back to the right track of the principle of "one country, two systems".

"Hong Kong nowadays is more stable than ever before. As long as the city focuses on economic development and gives full play of its unique advantages, with strong support from the central government, I am very optimistic about Hong Kong's future development," Lam said days ahead of the 25th anniversary of Hong Kong's return to the motherland that falls on July 1, when John Lee Ka-chiu, the incoming Hong Kong chief executive, and his team will take over.

Looking back on her term, Lam expressed gratitude to the central government, her team and the people of Hong Kong.

If the central government had inadequate trust in the chief executive, it would have been very difficult to implement the necessary measures, she said.

"But throughout the process, the central government has given me absolute support, clear guidance and trust," she said.

In a speech at a meeting in 2017 that marked the 20th anniversary of Hong Kong's return to the motherland, President Xi Jinping said it is imperative to have a correct understanding of the relationship between "one country" and "two systems".

"One country" is like the roots of a tree. For a tree to grow tall and luxuriant, its roots must run deep and strong, Xi said.

Lam said what the central government has done in the past five years is to help Hong Kong to strengthen its roots. Once the roots were strengthened, it should be up to Hong Kong to use the high degree of autonomy to continue to help the tree to flourish, she said.

"This brought us back to more work that we needed to do, on national security, national education, facilitating Hong Kong to integrate better into national development, and also to build fundamentals in terms of innovation, technology, financial services and culture," Lam said.

As for her team and the Hong Kong people, Lam said "not only the principal officials, but all the senior officials and the whole civil service have really delivered the best".

"The Hong Kong people do not want to see the erosion of the principle of 'one country, two systems' and they value very much the support from the central government. Thus, it makes it easier to put in place some of the measures that have been introduced, such as the electoral reforms," she added.

Lam said the main reason behind the turbulence in the past few years was certain forces aimed to hamper China's growth as well as its development, and its increasing international influence. The turbulence in 2019 has also made Lam and her team keenly aware of the complexity of the situation.

As part of China, it would be very dangerous to Hong Kong residents and compatriots in the mainland if the city had no comprehensive national security law and law enforcement mechanism, she said.

Therefore, the central government acted decisively in promulgating the National Security Law for Hong Kong, and the implementation of the law has not deviated from the principle of "one country, two systems" because it has been carried out by Hong Kong institutions.

As Hong Kong has moved from unrest to stability, and is at a critical juncture of maintaining stability and seeking prosperity, Lam said Hong Kong could not operate any longer in isolation without looking beyond the Shenzhen River so that it could create more synergy with the Guangdong-Hong Kong-Macao Greater Bay Area and many mainland cities.

Lam said she believes science and technology will be an important driving force for Hong Kong's future development as it cannot only create wealth and employment opportunities, but also every aspect of the application of technology and innovation can add new value to industries.

In the past five years, the city has invested HK$150 billion ($19.23 billion) in the sector, including building infrastructure and expanding and building new science parks.

"Hong Kong has a strong foundation in original research and we are doing some high-end manufacturing. But in order to produce in bulk and make large profits, we need the help of cities on the mainland in the Guangdong-Hong Kong-Macao Greater Bay Area," she said.

"Hong Kong and these mainland cities have high complementarity in their respective strength and together we can become a major innovation and development center in the world."