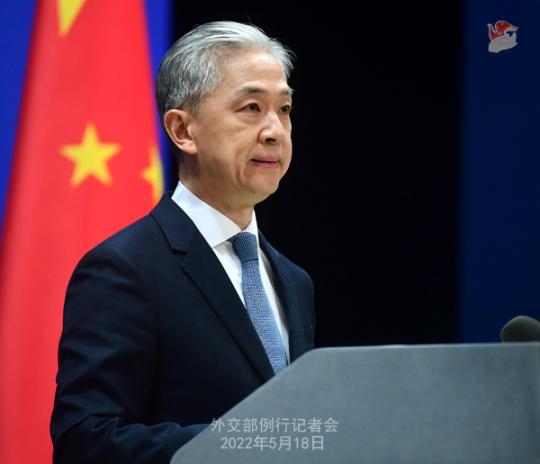 The United States should stop using the World Health Assembly to hype Taiwan-related issues, said Foreign Ministry spokesman Wang Wenbin on Wednesday, adding that any attempt to "use Taiwan to contain China" will be opposed by the vast majority of the international community members and will end up in failure.

"There is only one China in the world, and Taiwan is an inseparable part of China's territory," Wang told a daily news conference.

"China's position has been consistent and clear over the Taiwan region's participation in activities of international organizations, including the World Health Organization, which is that it must be handled according to the one-China principle," Wang said.

Wang's remarks came after the U.S. Department of State said on Tuesday that the island should be invited to participate in the assembly, which is scheduled to start on Sunday, and its exclusion is "a serious health concern".Such claims are "totally unjustified", Wang said.

The United Nations General Assembly clearly recognizes in Resolution 2758 which was adopted in October 1971 that representatives from the government of the People's Republic of China are the only lawful representatives of China to the UN, Wang noted.

"The one-China principle established by the two resolutions has gained universal support from the international community. It is what people aspire to and an unstoppable trend," Wang said.

"China's central government has attached great importance to the health of Taiwan compatriots, and has properly arranged for the Taiwan region to participate in global health affairs according to the one-China principle."

The government had briefed the region about the COVID-19 situation 386 times by April 28.

In another development, Wang said on Wednesday the U.S.' "self-contradiction" has led to doubt over its seriousness in adhering to the one-China policy.

Voicing China's "resolute objection" to U.S. Chief of Naval Operations Admiral Michael Gilday's remarks over the Taiwan Straits, Wang said the remarks violate the commitment the U.S. has made to China over the Taiwan question and pose interference in China's domestic affairs.