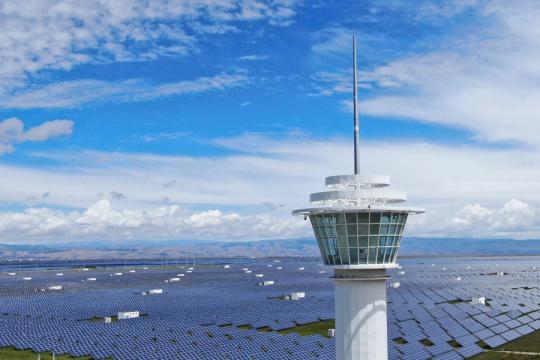 China recorded declines in the density of all major air pollutants apart from ozone in the first four months of this year, and forecasts show that the hazardous gas will remain a primary air pollutant in many areas across the country.

From January to April, the cumulative number of days in the country's 339 major cities with fairly good air quality－below 100 on a zero-to-500 scale－was 85.1 percent, up by 1.3 percentage points from the same period a year earlier, according to the Ministry of Ecology and Environment on Wednesday.

Sulfur dioxide stood out as the major pollutant with the largest drop in density. The average concentration of the gas in the four months reached 9 micrograms per cubic meter, down by 18.2 percent from the same period last year.

Following a year-on-year decrease of 4.9 percent, the density of PM 2.5 particulate matter during the period was 39 mcg per cubic m. The average concentration of ozone, however, went up by 8.5 percent to 127 mcg per cubic m.

The ozone layer about 20 kilometers above the ground helps to shield the Earth from harmful ultraviolet radiation, but even relatively low amounts of the gas near the ground can cause lung damage and result in shortness of breath.

It's highly suggested that people stay indoors when there is ozone pollution, especially the elderly and children.

The density of ozone declined in the first two months of the year, but it has been on the rise since March. In March, the average concentration of the gas rose year-on-year by 6.1 percent. In April, an uptick of 8.5 percent was reported.

"In the second half of May, the meteorological conditions in most parts of the country will be favorable for the dispersal of air pollutants," the ministry said in a previous release.

However, some areas may suffer medium or even heavier levels of air pollution at the end of this month, it said.

Influenced by temperature increases, some areas in North, East and Northeast China will experience medium-level ozone pollution. Despite comparatively good air quality, many other regions will still see ozone as the primary air pollutant.

Mild air pollution with ozone as the major pollutant is forecast to linger in Beijing from May 18 to 23.