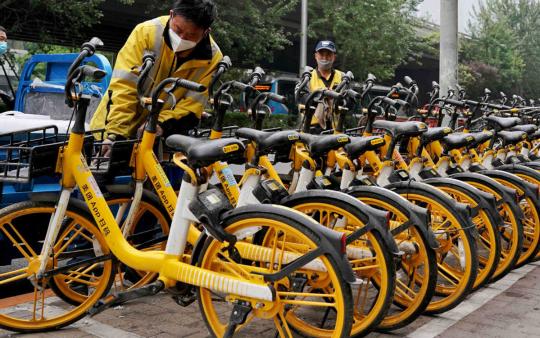 More than 5 million shared bikes on the Chinese mainland are using positioning and navigation services enabled by the country's Beidou Navigation Satellite System, according to an industry insider.

Sun Zhongliang, deputy president of the Global Navigation Satellite System and Location-Based Services Association of China, said on Wednesday in Beijing that these shared bikes have been equipped with domestically developed Beidou-based positioning chips. They belong to three major Chinese operators－Meituan, Hellobike and Didi Qingju－and are deployed in more than 450 cities on the mainland, he added.

The chips feature high accuracy and sensitivity, and low power consumption. They allow for a better user experience and easier management for city authorities, Sun noted.

"Currently, several new models of shared electric bikes with Beidou-based chips have also started to be manufactured and put into the market. In addition to positioning and navigation, the chips will help users and bike companies monitor user speed, battery condition and attempted crimes involving the vehicle," he said.

An industry observer who wished to be identified as Zhao said shared bike operators began to use positioning chips compatible with both GPS and Beidou services several years ago.

"After the Beidou system became fully operational in the summer of 2020, shared bike companies started installing Beidou-based chips on their bikes on a larger scale," he said, noting that the latest generation of chips is smaller and more advanced than previous types and is popular among bike operators.

Beidou is currently China's largest civilian satellite system and one of four global navigation networks, along with the United States' GPS, Russia's GLONASS and the European Union's Galileo.

Since 2000, a total of 59 Beidou satellites, including the first four experimental ones, have been lifted on 44 Long March 3-series rockets from the Xichang Satellite Launch Center in Sichuan province, with some of them having since been retired.

In June 2020, the final satellite to complete Beidou's third-generation network was lifted by a Long March 3B rocket at the Xichang center. The next month, President Xi Jinping announced that the system had been completed and had started providing full-scale global services.

According to the 2022 White Paper on the Development of China's Satellite Navigation and Positioning Industries, compiled by Sun's association and published on Wednesday, by the end of 2021, the overall value of satellite-enabled navigation and positioning services in China was 469 billion yuan ($69.5 billion), a 16.3-percent increase year-on-year.

More than 500,000 Chinese people now work at around 14,000 domestic institutes and companies doing business related to Beidou and other satellite navigation and positioning services, according to the white paper.