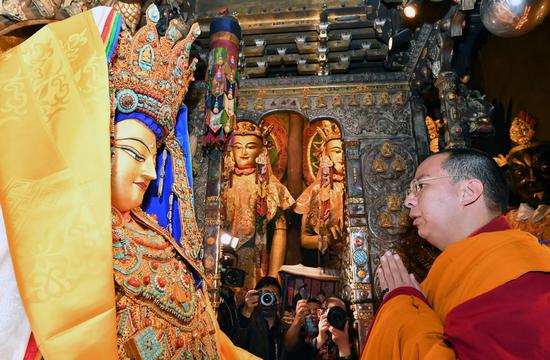 In the temple, he chanted sutras, prayed, and presented hadas -- silk scarves used to express respect and greeting -- to Buddhist statues.

He then led more than 100 monks in chanting sutras, and prayed for world peace, national prosperity and stability as well as people's well-being, before giving head-touching blessings to monks for nearly an hour.

Besides performing his duties at the Tibet branch of the Buddhist Association of China, Panchen Rinpoche will attend a series of religious and social activities during his stay in Lhasa.

Panchen Erdeni is one of the most influential "Living Buddhas" in Tibetan Buddhism. Panchen Erdeni Chos-kyi rGyal-po was born on Feb. 13, 1990 in Lhari county, the city of Nagqu in Tibet. In 1995, he was approved by the State Council as the reincarnation of the 10th Panchen after a lot-drawing ceremony and was enthroned as the 11th Panchen Erdeni.