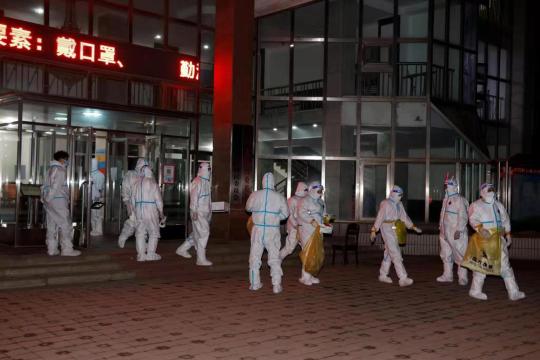 An increasing number of Chinese cities have been performing regular nucleic acid testing among their residents to reinforce the defense against the spread of the Omicron variant, with novel approaches being taken including mixing up the testing variables such as frequency, area and even gender.

Starting on Tuesday, Dalian, Liaoning province, is requiring male residents to be tested on Tuesdays and female residents on Thursdays. Those who cannot take tests on weekdays can do them on Saturdays.

"In principle, all residents in the city should take nucleic acid tests once a week," Qu Gang, deputy director of Dalian's health commission, told a Monday news conference.

"The Omicron variant of the coronavirus spreads faster with a doubling infection rate in two to three days," said Qu.

"Considering that the transmission risks at the community level are largely related to family gatherings, it is better to identify potential risks early if the detection of members from the same family is being distributed at different times."

In other words, a wife and husband can take turns testing to pinpoint potential risks in a timely manner while reducing the strain on testing resources.

The port city has set up more than 2,300 fixed nucleic acid testing sites and some mobile sites.

Residents can reach a site within a 15-minute walk and take a test in less than 20 minutes.

If an individual fails to take a regular test as required and subsequently infects others, he or she must bear legal responsibility, said Qu.

The new measure, which aims to detect potential risks in a timely manner and eliminate the virus dynamically to minimize its spread, has won support from local residents.

"When I heard the news, I thought it was funny. But later, I found it a very good idea," said Song Jiahua, 37.

"Due to the fast spread of Omicron, the result of one person is most probably the same as his or her family members. It is equivalent to monitoring the residents twice a week at the cost of just once," he explained.

On Tuesday, Song took the test after work at a testing site near his home. Some of his colleagues took tests during their lunch breaks.

"I think it is more convenient now. We saved money and time－though the residents do not need to pay for it by themselves," said Song.

From April 5, it made an adjustment with negative results from within 72 hours needed to go to public places and to take public transportation.

Hangzhou, Zhejiang province, has required all residents to take a test every 48 hours since April 28.