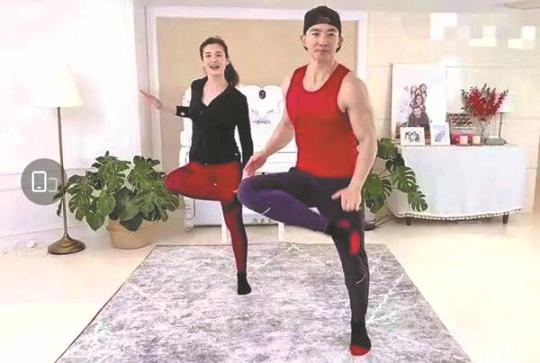 Chinese singer Liu Genghong is enjoying an extra spike in popularity recently after branching out into online fitness.

The 49-year-old, aka Will Liu, posts fitness videos on Douyin, the Chinese version of TikTok. In the videos, he often works out to the fast-paced tune of his friend Jay Chou's Compendium of Materia Medica, among other songs. Now his Douyin account has rocketed to 55 million followers and 53 million likes, igniting people's interest in indoor exercise.

According to Pu Zhengning, associate professor of Southeast University in Nanjing, Jiangsu province, the epidemic has limited access to gyms and fitness centers, so simple aerobic exercises that do not require equipment are perfect for people to perform at home. And that is exactly the demand that Liu has tapped into on his social media platforms.

Since the COVID-19 outbreak began in 2020, downloads of fitness apps have soared, indicative of the growing popularity of online fitness. As an alternative to people gathering together to keep fit, the phenomenon is also helpful for epidemic prevention purposes.

According to a Douyin report in March, the number of fitness videos on the platform in 2021 increased by 134 percent, while followers of fitness trainers were up by 208 percent compared with the previous year.

Wei Fang, a student at Shandong Normal University, is one of Liu's fans. Wei also posts short videos on Douyin to record her exercises.

"My major requires me to sit for a long time, sometimes for the whole day," she said. "So how could I refuse a star singer as a personal trainer!? Besides, when watching the livestream, I feel like I'm working out with friends, so that encourages me to keep going until the last minute," added Wei, who claims to have shed 3.5 kilograms in just seven days, while also reaping the mental benefits of exercising with a more positive mood.

It seems "cloud fitness" is no flash in the pan, offering a great alternative to gym memberships, which are often not cheap. In the past, aerobics on TV proved popular, and nowadays it's even easier to follow along and learn from instructors on short-video platforms and social media.

According to the 2022 Spring/Summer Sports and Fitness Consumption Trend Report, published by Jingdong Institute of Consumer and Industrial Development, the sales of yoga and dance products have achieved rapid growth since March. The sales of yoga stretchers, shoes, domes and bags increased by 868 percent, 816 percent, 110 percent and 104 percent, respectively.

In conjunction with social media platforms, China's sports governing body launched online games on April 28. Ding Dong, an official with the General Administration of Sport, said: "The aim of the games is to inspire the mass enthusiasm for fitness."