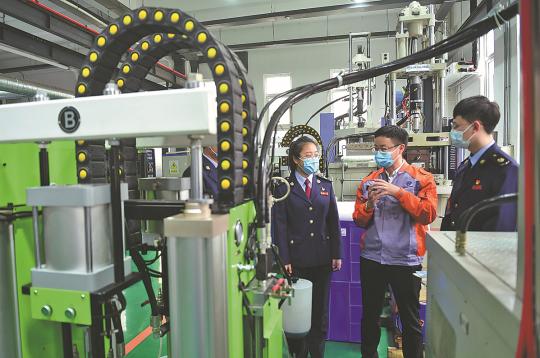 China's continued tax and fee cuts and the recent move of refunding value-added tax credits to businesses are helping market players withstand economic headwinds and are critical in supporting growth this year, an official said.

Xu Hongcai, vice-minister of finance, said in a published interview in Economic Daily on Tuesday that this year, tax cuts and refunds work as critical means of keeping overall economic performance stable.

Xu said the amount of tax cuts and refunds is expected to reach 2.5 trillion yuan ($378 billion) this year, adding that all competent measures will be put in place in an expedited manner.

During the time between April 1, when the country's tax credit refund scheme was first enacted, and April 28, some 625.6 billion yuan has been refunded to businesses in an effort to inject direct liquidity into businesses and ease their financial burdens.

"Outstanding VAT credits for small and medium-sized businesses will be refunded in advance in May. In addition, we will step up the refund process for large-scale enterprises to ensure that most tax credit refunds will be realized in the first half of the year," he said.

Figures from the State Taxation Administration show that in April, the majority of VAT tax credit refund recipients were small and micro businesses. This year's Government Work Report said that VAT credit refunds will account for 1.5 trillion yuan this year and will all go straight to enterprises.

Su Jingchun, an associate professor with the Chinese Academy of Fiscal Sciences, pointed out that this year, the effectiveness of tax refunds for businesses, particularly for smaller ones, should not be underestimated.

"The greatest challenge facing the economy now is the magnitude of uncertainty both externally and internally, which adds to the difficulty of macro policy maneuvers and hampers business confidence. Yet the move and timetable of VAT tax refunds have been announced early in March, and have been swiftly implemented so far, despite growth headwinds. This not only alleviates liquidity crunches for smaller businesses, but more importantly, boosts their confidence and builds up better prospects for the latter half of the year," Su said.

Hao Aixiu, representative of a pharmaceutical production company in Henan province, said recently that the firm received some 1.24 million yuan in tax refunds from the local taxation department. The company received the refunds only a couple of hours after its refund applications were filed.

"We've been facing increasing challenges in the past two years, as prices of raw materials keep ticking up, while production and logistics were frequently distorted by the pandemic situation," she said. "Liquidity from the tax refund scheme is critical for underpinning operations and consolidating our market distribution channels."