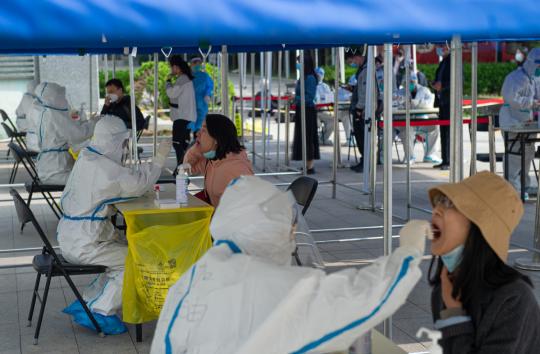 The number of infections in Beijing's latest COVID-19 outbreak since April 22 has surpassed the total tally in the city's Xinfadi outbreak in 2020, and interventions will be further strengthened to cut potential transmissions, a senior official said on Wednesday.

The Xinfadi outbreak in the summer of 2020, which was related to a wholesale market of agricultural produce in the capital and involved 335 patients, was the largest COVID-19 outbreak in Beijing before the latest.

Beijing reported 52 new local confirmed cases between 3 pm on Tuesday and 3 pm on Wednesday, bringing the total number of infections to 505 since April 22, according to the Beijing Center for Disease Prevention and Control on Wednesday.

"Beijing has done several rounds of mass nucleic acid testing at the community level in most districts," said Xu Hejian, spokesman for the municipal government, on Wednesday. "The city has been reporting around 50 daily cases successively for several days."

The transmission chains have not yet been completely cut off in Beijing, as new cases were continuously detected during the mass testing at the community level, Pang Xinghuo, deputy director of the Beijing CDC, told the news conference.

In some cases, infected people who displayed symptoms still tested negative, she added.

Among the 52 new infections, 45 were reported in controlled zones, six were found during community testing and one went to a hospital because of sore throat.

Of the total 505 infections, Chaoyang district registered 201 cases, the most in the outbreak, followed by Fangshan, which has reported 130 cases since April 22.

Starting on Wednesday, 63 bus lines have stopped operation and 48 have changed routes to avoid infection risk in locked-down and controlled zones in Chaoyang, as part of epidemic control measures. Up to 389 bus stops were affected, said Rong Jun, spokesman for Beijing's transportation commission.

Around 3.5 million people in Chaoyang and people in other areas affected by public transportation adjustments should work from home starting on Thursday, the first workday after the May Day holiday, the municipal government announced.

Previously, dozens of bus lines in Fangshan and Tongzhou made adjustments to reduce infection risk.

In addition, more than 60 subway stations on 14 subway lines have closed starting on Wednesday.

Passengers cannot enter or exit from those stations but still can transfer inside.

To serve residents who need to go to the hospital or have other special needs, the authority has organized taxi teams for emergency use.