Stricter measures in Beijing over holiday 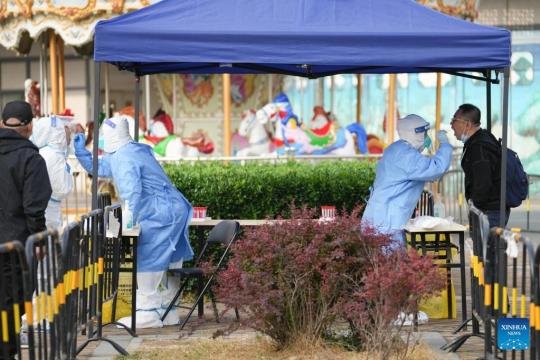 To curb the COVID-19 outbreak in Beijing, residents must have negative nucleic acid test results taken within 48 hours if they wish to enter public places including scenic areas, hotels and homestays during the May Day holiday, which begins on Saturday, a government spokesman said on Friday.

After the five-day holiday, students and workers should have negative nucleic acid test results taken within 48 hours before returning to school or work, Xu Hejian, spokesman of the municipal government, said at a news conference.

"Beijing has reported dozens of locally transmitted COVID-19 cases every day since April 22," he said. "The city has completed two rounds of nucleic acid testing for everyone living or working in 11 districts this week, in addition to Chaoyang district, which began testing earlier."

Chaoyang, which had a total of 101 cases by 3 pm on Friday, the most since the latest outbreak started, began its third round of testing for people living or working in the district on Friday.

The city reported 31 new locally transmitted cases and three new asymptomatic cases between 3 pm on Thursday and 3 pm on Friday. There have been 228 cases since April 22, involving 12 districts, according to Pang Xinghuo, deputy director of the Beijing Center for Disease Prevention and Control.