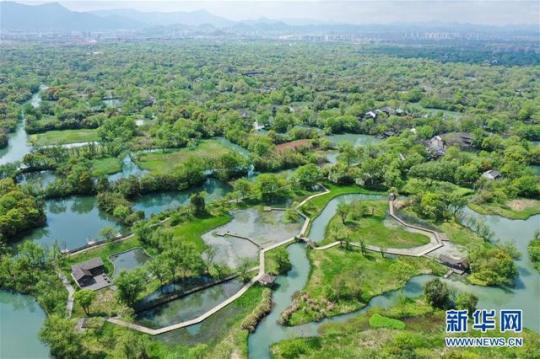 Xixi National Wetland Park in Hangzhou, East China's Zhejiang province, is known as the "kidney of Hangzhou" due to its cleansing properties derived from its abundance of natural resources such as water networks, rivers, ponds, moors, swamps and mudflats. (Photo/Xinhua)

China has 64 wetlands of international importance that cover 7.32 million hectares, harbor 2,258 plant species and 260 bird species, the National Forestry and Grassland Administration said in a white paper released on Wednesday.

The ecological conditions of the 64 wetlands, one in Hong Kong and the rest on the Chinese mainland, remain stable, it said.

Wetlands of international importance are those that play unique and important roles in the study of ecology, botany, zoology, limnology and hydrology.

Forty-eight of the Chinese wetlands are in inland areas, with the rest along the coast.

The supply of water to the wetlands has increased steadily, and their water quality has also improved, the white paper said, adding that public awareness of wetlands protection has also been enhanced.

Conservation of wetlands in China is crucial, as it ranks fourth in wetland area in the world with 65.9 million hectares, 10 percent of the world's wetland areas. The country now has 899 national wetland parks after 44 opened last year.

In 1992, China joined the Convention on Wetlands of International Importance, which is known as the Ramsar Convention.

"Over the past three decades, China has had many of its important wetlands listed in the convention," said Wu Zhimin, director of the administration's wetlands management department. "The protection of its wetlands has also contributed to wetlands conservation globally."

Wetlands are rich reservoirs of biodiversity that are vital for humanity and nature to thrive, with 40 percent of the world's plant and animal species depending on wetlands, according to the convention.

They are also among the earth's top carbon stores and their conservation can help absorb carbon emissions.

Over the past five years, wetlands in China have expanded steadily by 202,600 hectares, making significant contributions to water safety and environmental protection, the administration said.

China passed a new law on wetlands protection in December that was the country's first specialized law on the issue. It will take effect on June 1.

"China's newly adopted wetland protection law will strengthen the protection of its wetlands and conserve its biodiversity and ensure that wetlands will continue to provide social, economic and cultural benefits to its people," said Martha Rojas Urrego, secretary-general of the convention.

Li Chunliang, deputy director of the administration, said China is practicing its commitment to the convention and promoting an eco-friendly road for sustainable development.

"We will make continuing efforts on wetlands conservation and share our experiences with the international community," Li said.