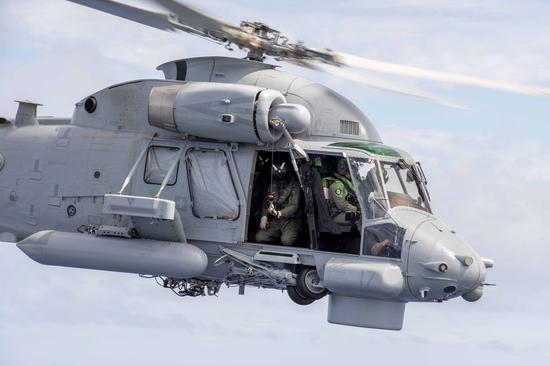 A helicopter is doing a training flight during New Zealand Navy vessel HMNZS Wellington's transit to Tonga on Jan. 19, 2022. (New Zealand Ministry of Defense/Handout via Xinhua)

The delivery of supplies will be contactless and the aircraft is expected to be on the ground for up to 90 minutes before returning to New Zealand, said Defense Minister Peeni Henare, adding Tonga is currently free of COVID-19 and operates strict border controls to keep the virus out.

The aircraft is due to arrive in Tonga at approximately 4:00 p.m. New Zealand time. No aircraft could land before now because the runway had to be cleared of volcanic ash, Henare said.

The New Zealand response to the developing situation in Tonga is well underway and the offshore patrol vessel HMNZS Wellington is expected to arrive in Tonga later on Thursday. It is carrying hydrographic and dive personnel, and also has a Seasprite helicopter to assist with supply delivery, he said.

Vessel Wellington's first task will be to check shipping channels and wharf approaches to Tonga's port to ensure vessels can go alongside, and check the structural integrity of the wharf, the defense minister said.

Meanwhile, the maritime sustainment vessel HMNZS Aotearoa has bulk water supplies on board, as well as other supplies, and is expected to arrive in Tonga on Friday.

"Water is among the highest priorities for Tonga, and the Aotearoa can carry 250,000 liters, and produce 70,000 liters per day through a desalination plant," Mahuta said.

Henare said New Zealand is also preparing to deploy HMNZS Canterbury, with two NH90 helicopters on board, which is planning to leave on Saturday.

Communications with Tonga remain limited. Some 2G connectivity has been restored for telecommunications provider Digicel customers. However, demand is exceeding capacity and connection is inconsistent. With just a portion of calls being connected, people are asked to be patient. Work is underway to add more capacity, according to Mahuta.

The tsunami had a significant impact on part of the foreshore of Tonga, with boats and large boulders washed ashore and shops along the coast damaged.