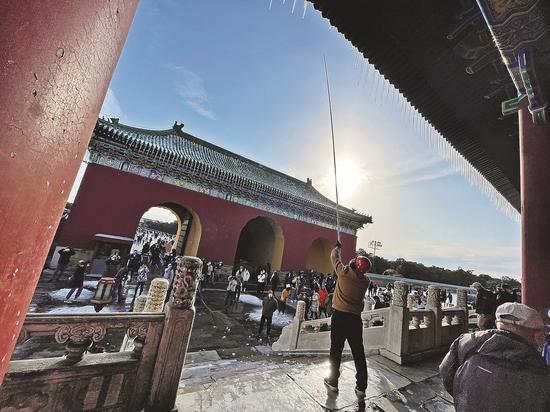 A worker knocks icicles off the eaves of a building in Beijing's Temple of Heaven Park on Sunday after snow and ice accumulated overnight. (Photo: China Daily/Du Lianyi)

This winter's first massive snowstorms began hitting North and Northeast China on Saturday, freezing roads, trapping cars in mountains, closing highways and leading to the suspension of trains and other forms of public transportation.

From Sunday to Monday, between 20 and 40 millimeters of snow were forecast to cover areas including the Inner Mongolia autonomous region and the provinces of Hebei, Shandong, Liaoning and Jilin, the National Meteorological Center said.

Most northern provinces were covered by double warnings for snowstorms and cold waves released by the center on Sunday.

A cold wave from western Siberia in Russia caused the blizzards that led to plummeting temperatures across the country since Saturday, the center said.

Since Saturday, China has seen temperature drops between 8 C and 17 C nationwide. On Wednesday, Urumqi, capital of the Xinjiang Uygur autonomous region, experienced a drop of 22 C.

A video showed about 1 meter of heavy snow blown by strong wind blocking a door of a herdsman's house in Baotou, Inner Mongolia, on Saturday. Sanitation departments in Hohhot, Inner Mongolia's regional capital, sent hundreds of snow removal trucks and thousands of workers to clean snow and ice off roads, local media reported.

By 9 pm that night, police officers in Beijing's Mentougou district had rescued 10 vehicles trapped by the snowstorm in mountains, Beijing News reported. One was an ambulance taking a 90-year-old to hospital.

On Saturday, Beijing started its supply of heating, with a minimum indoor temperature standard of 18 C, the local government said.

On Sunday, transportation departments said that some highways connecting Beijing with other areas had been shut down, and some train services linking the capital with Shanghai and Tianjin would be delayed or suspended. More than 170 bus lines were suspended, Beijing Municipal Transport said.

Liaoning's provincial meteorological service issued a red warning for snowstorms, the highest in the four-level warning system, on Sunday. Under the alert, schools need to shut down if necessary, and some methods of transportation should be suspended.

Fang Chong, chief forecaster at the National Meteorological Center, said the cold wave's impact is expected to dwindle after it spreads to South China on Monday.

"Yet, as cold air continuously replenishes, the temperature is then forecast to remain low nationwide," he said, warning people to raise their awareness of blizzards, which had brought more snow than usual.

Weather.com said this year's snow in Beijing arrived 27 days earlier than the average date between 1991 and 2020.

"However, due to water vapor conditions, chances are small that large-scale and continuous low-temperature rain and snow will occur."