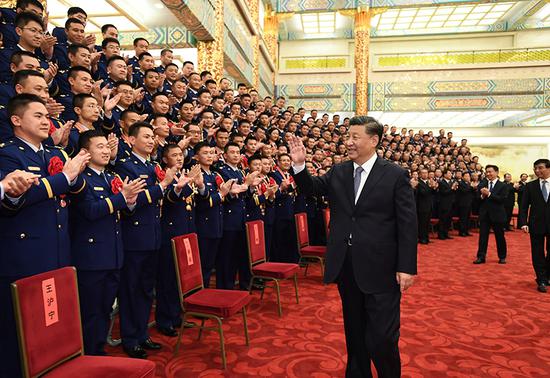 President Xi Jinping meets with representatives of national role models in the field of emergency management and loyal guards in the fire-fighting sector on Nov 5, 2021. (Photo/Xinhua)

President Xi Jinping met on Friday with national role models in the field of emergency management and loyal guards in the firefighting sector who were honored at a recent commendation conference.

Xi, who is also general secretary of the Communist Party of China Central Committee and chairman of the Central Military Commission, congratulated the role models and loyal guards and extended his sincere greetings to all those working in the emergency management and firefighting sectors.

He talked with the honorees and had a group photo taken with them.

The first national commendation conference to honor such workers was held on Thursday in Beijing.

The honorees consisted of eight first-class hero models in the emergency management sector, 99 advanced units, 190 advanced workers, as well as 30 loyal guards in the firefighting sector and 30 second-class hero models.