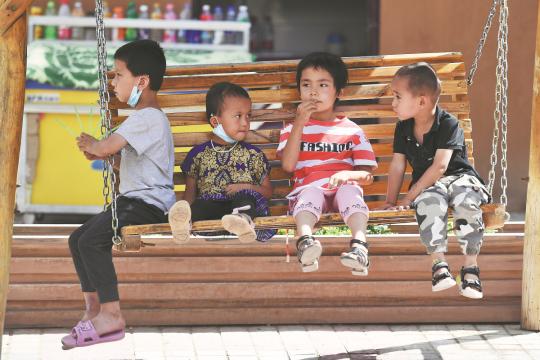 A virtual event Wednesday at the United Nations introduced the Xinjiang Uygur autonomous region's natural beauty and development achievements to the outside world.

The event "Xinjiang is a Wonderful Land" was jointly held by China's Permanent Mission to the UN and the government of the Xinjiang region, and moderated by Dai Bing, deputy permanent representative to the UN. It provided a glimpse of real life in Xinjiang, located in Northwest China.

Shewket Imin, chairman of the Standing Committee of the People's Congress of Xinjiang, explained the region's development and said that Xinjiang society is stable and improving.

Imin said that economic development continues; the standard of living has improved significantly; and a decisive victory has been achieved in poverty alleviation.

Zhang Jun, China's permanent representative to the UN, said at the UN sideline event that to protect local people and ensure social stability, Xinjiang has taken a series of counterterrorism and deradicalization measures in accordance with the law.

"There has not been a single terrorist attack there over the past four years. The region enjoys social stability and a growing economy. People of all ethnic groups enjoy better lives with their human rights better protected," said Zhang.

"It should be pointed out that the counterterrorism and deradicalization measures have the full understanding and support from all ethnic groups in Xinjiang. The measures comply with the UN Global Counter-Terrorism Strategy and the Plan of Action to Prevent Violent Extremism and draw from Western countries' practices. They are totally legal and legitimate," Zhang said.

A few Western countries have not acknowledged when people in Xinjiang have suffered from terrorist attacks yet keep "fabricating lies" while Xinjiang's development has entered the best period in its history, Zhang said.

He said that "everybody knows that they hype up the Xinjiang question and apply double standards, because they desperately want to smear Xinjiang, undermine the local industries and make trouble for China's development", said Zhang.

"Xinjiang is indeed a wonderful land. Facts and truths on Xinjiang are there for everyone to see. More than 1,000 diplomats, journalists and religious figures from over 100 countries have visited Xinjiang upon invitation. They are all very much impressed by what they have seen," the ambassador emphasized.

During the virtual event, people from different walks of life in Xinjiang told their own stories.

A Uygur girl recalled her experience of being injured and having an amputation after a terrorist attack.

A Belgian entrepreneur introduced his work in the cotton industry over the past 16 years and said he has never witnessed "forced labor" or violations of human rights.

Around 120 people, including permanent ambassadors to the United Nations, diplomats, officials of UN agencies, journalists from Chinese and foreign media, and representatives of non-governmental organizations attended the meeting. The UN Web TV broadcast the meeting live, and nearly 1,000 people watched.

A series of video clips reflecting Xinjiang's landscape, cultures and religions, economic and social development, and promotion and protection of human rights was played for the audience.

The ambassadors and representatives of Pakistan, Russia, Eritrea, Saudi Arabia, Cuba, Iran, Morocco, Syria and other countries said that the virtual meeting introduced the real and beautiful Xinjiang to the outside world, with rich content and a diverse format.