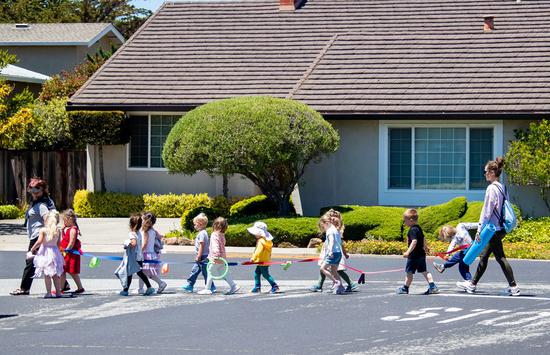 Children go out with their teachers in San Francisco, California, the United States, June 15, 2021. (Photo by Dong Xudong/Xinhua)

Child cases of the coronavirus surged to new high, nurses left hospitals for traveling jobs with handsome pay, notable resistance to vaccines was found among 30 percent of the U.S. population, and a booster shot is being prolonged due to the lack of data.

During the first week of September, which means the United States formally steps into the 19th month of its fight against the COVID-19 pandemic, an overall roadmap is yet to be fully clear for the federal government and the states that have no choice but keep fumbling for their way to a foreseeable settlement with the virus.

Kids are herded back into the classroom for a second pandemic school year, but this time with the more contagious Delta variant getting more people sick. "Navigating school safely will be trickier than ever," reported CNN on Friday.

Between the Delta variant and more people going to restaurants, weddings and large events without masks than at this time last year, kids face a higher risk of getting sick, said the report.

Masks and better classroom ventilation can help protect kids, but to reduce risk further, adults will have to step it up -- "more people need to get vaccinated, and more adults need to reduce their exposure to the virus," health experts were quoted as saying.

For hospitals, they expect not just more COVID-19 patients, but an increase in flu cases and patients with other respiratory illnesses, which has particularly strained the 220 children's hospitals represented by the Children's Hospital Association, added the report.

As COVID-19 continues to surge across the population, cases and hospitalizations among kids "increased exponentially." They are at their highest numbers since winter, said the American Academy of Pediatrics (AAP).

Child COVID-19 cases are up, with about 204,000 cases added last week. For the week ending Aug. 26, children accounted for 22.4 percent of reported weekly COVID-19 cases, according to the AAP.

Due to the surge, U.S. hospitals are not only reaching their capacity, but hit with a crisis of nurse staffing -- many of them are quitting or retiring, exhausted or demoralized by the crisis, and some others are leaving for lucrative temporary jobs with traveling-nurse agencies that can pay 5,000 U.S. dollars or more a week, reported NBC on Friday.

"Health leaders say nurses are bone-tired and frustrated from being asked to work overtime, from getting screamed at and second-guessed by members of the community, and from dealing with people who chose not to get vaccinated or wear a mask," said NBC, adding that the death that nurses see every day "is not honored or recognized."

Meanwhile, the average pay for a traveling nurse has soared from roughly 1,000 to 2,000 dollars per week before the pandemic to 3,000 to 5,000 dollars now, health care professionals were quoted as saying. In Texas, over 6,000 travel nurses have flooded the state to help with the COVID-19 surge through a state-supported program.

Morning Consult spoke with an average of 3,334 adults per state between July 24 and Aug. 23, finding that, nationally, there's still "notable resistance" among 30 percent of the population. "Chief reasons for COVID-19 vaccine hesitancy are concerns about side effects and fears that the clinical trials moved too fast," reported Forbes on Thursday.

Another important news related with coronavirus vaccines this week is that top federal health officials have told the White House to scale back a plan to offer coronavirus booster shots to the general public later this month, saying that regulators need more time to collect and review all the necessary data.

Janet Woodcock, the acting commissioner of the Food and Drug Administration (FDA), and Rochelle P. Walensky, who heads the Centers for Disease Control and Prevention (CDC), warned the White House on Thursday that their agencies may be able to determine in the coming weeks whether to recommend boosters only for recipients of the Pfizer-BioNTech vaccine, and possibly just some of them to start.

"We always said we would follow the science, and this is all part of a process that is now underway," White House spokesman Chris Meagher was quoted by The New York Times (NYT) as saying on Friday. The administration was awaiting a "full review and approval" of booster shots by the FDA as well as a recommendation from the CDC, he added.

Less than three weeks ago, President Joe Biden said that contingent on FDA approval, the government planned to start offering boosters the week of Sept. 20 to adults who had received their second shot of the Pfizer-BioNTech or Moderna vaccine at least eight months ago.

Biden cast the strategy as another tool that the nation needed to battle the highly contagious Delta variant, which has driven up infection rates, swamped hospitals with COVID-19 patients and is now leading to an average of more than 1,500 deaths a day.