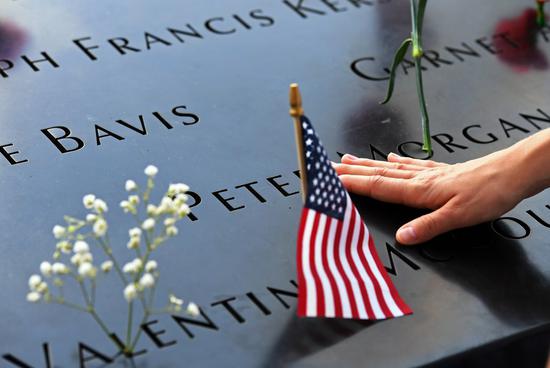 A woman touches a plate on which names of 9/11 victims were inscribed at the National September 11 Memorial and Museum in New York, the United States, Sept. 11, 2019. (Xinhua/Li Rui)

U.S. President Joe Biden on Friday signed an executive order directing his government to review and release some documents related to the FBI's investigation into the Sept. 11, 2001 terrorist attacks.

The order directs the Justice Department and other federal agencies to review documents and release declassified information over the next six months.

"We must never forget the enduring pain of the families and loved ones of the 2,977 innocent people who were killed during the worst terrorist attack on America in our history," Biden said in a statement.

Adam Schiff, House Intelligence Committee chairman, said the panel would oversee the review "to ensure that all agencies adhere to the president's guidance to apply the maximum degree of transparency allowed by law when conducting the review."

A number of families of 9/11 attack victims have for years pushed the government to declassify and make public more information around the event.