China's CPI expected to rise 1.5% in May 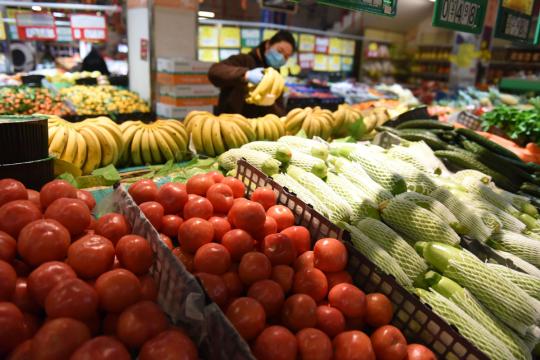 China's consumer price index, or CPI, a major gauge of inflation, is estimated by experts to increase around 1.5 percent in May, Economic Information Daily reported on Monday.

Due to the carryover effect and the rise in refined oil prices, China's CPI is expected to rise 1.5 percent year-on-year in May, said Zhang Yu, chief macro economy analyst of Huachuang Securities Research Institute.

Zhong Zhengsheng, chief economist of Ping An Securities, predicted China's CPI will rise 1.6 percent year-on-year in May, with pork prices down 9.6 percent month-on-month.

The CPI is expected to pick up to 1.4 percent year-on-year, with food prices continuing to fall and non-food prices picking up slightly, said Gao Ruidong, chief macroeconomist at Everbright Securities.

The May Day holiday has led to the recovery of offline consumption with prices of air tickets and hotels rising generally, and core CPI, which excludes food and energy prices, is expected to further improve, said Zheshang Securities Chief Economist Li Chao.

Industrial insiders believe that the transmission impact of the current prices rising of bulk commodity on CPI is limited.

However, looking ahead, both economic fundamentals and policies do not support large-scale price increases, and the basis for long-term inflation does not exist, Tan said.

China's consumer price index grew by 0.9 percent year-on-year in April, versus the 0.4 percent growth in March, according to the National Bureau of Statistics.