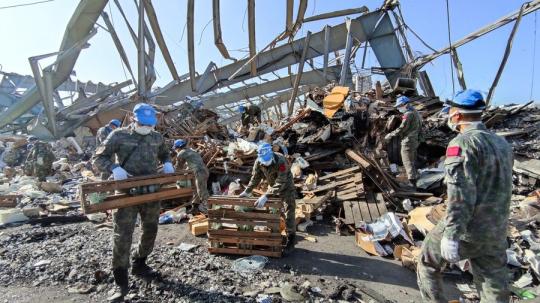 A group to support United Nations peacekeepers was launched on Tuesday under the initiative of China, Brazil, Indonesia and Rwanda.

The Group of Friends on the Safety and Security of United Nations Peacekeepers will provide a platform to strengthen information sharing, policy coordination and capacity building, said Ambassador Zhang Jun, China's permanent representative to the UN, at a virtual event Tuesday.

The UN peacekeepers were established in 1948 to help countries torn by conflict to create conditions for lasting peace.

More than 1 million people have served as UN peacekeepers, and more than 3,700 of them from over 120 countries have lost their lives in the cause of peace. This year, 49 peacekeepers have died.

China is the second-largest financial contributor to the peacekeeping budget and the largest troop contributor among the permanent members of the UN Security Council.

Ambassador Zhang emphasized that the Group of Friends will study the new challenges in keeping peacekeepers safe and raise awareness and promote a common understanding among member states through the Security Council, the General Assembly and other platforms.

Ensuring the safety and security of peacekeepers requires not only policy guidance but also practical action, Zhang said.

He said that China is one of the champions of safety and security under the Action for Peacekeeping (A4P) initiative, which has provided security and safety training for peacekeepers from many countries and funded the Secretariat in carrying out relevant projects and studies.

China also had decided to donate 300,000 doses of COVID-19 vaccines to peacekeepers. Under China's initiative, the Security Council adopted the first resolution on peacekeeper security and safety.

The participants spoke highly of China's leadership in establishing the group. They said that it is urgent and timely, and that China's efforts demonstrate its tangible support for multilateralism and the work of the UN.

They reaffirmed their commitment to improving the safety and security of peacekeepers and stressed that they will actively participate in the activities of the group to enhance the protection of peacekeepers, reduce security risks for them, and better play the important role of peacekeeping operations in promoting international peace and security.