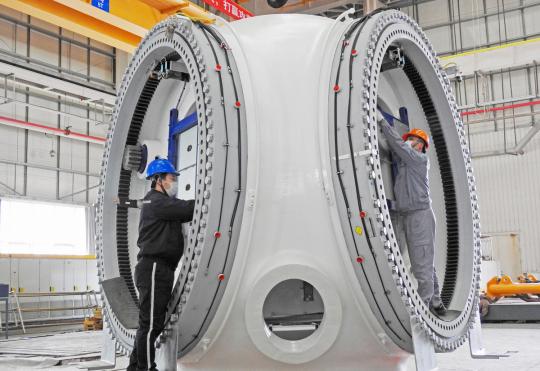 Workers assemble a hub for a wind power generation facility in Lianyungang, Jiangsu province, on Tuesday. Profits of China's major industrial firms maintained fast expansion in the first quarter of the year, according to the National Bureau of Statistics. (GENG YUHE/FOR CHINA DAILY)

China's economic recovery is on a solid track across the nation as almost all regions have registered double-digit economic growth on a yearly basis in the first quarter of the year, officials and experts said.

As of Tuesday, 30 of the 31 provincial-level areas on the Chinese mainland, apart from the Tibet autonomous region, had released their first-quarter regional economic growth results, which were all above 12 percent year-on-year.

Hubei province, which was the area hardest hit in China by the COVID-19 pandemic, led the rebound in the first quarter with a 58.3 percent surge in gross regional output due to a low comparison base, followed by Hainan province, whose booming duty-free market underpinned a 19.8 percent regional economic growth, according to local statistics bureaus.

Meanwhile, Zhejiang, Jiangsu, Anhui, Guangdong and Jiangxi provinces and the municipality of Chongqing also posted economic growth higher than the national average level of 18.3 percent in the first quarter, amid an export-driven rebound in industrial production.

While concerns are rising that the world economy could be headed for a "K-shaped" recovery, in which some sectors and areas rebound strongly while others are mired in decline, the results have provided a kind of relief by indicating that the recovery in China is across the nation, experts said.

"Thanks to the low comparison base and a continuous momentum of recovery, the 30 provincial-level areas all registered double-digit growth in the first quarter, though the local resurgence of COVID-19 cases has weighed on the recovery in consumption and services," said Ying Xiwen, an economics researcher at China Minsheng Bank.

But Ying said a broad-based recovery across the nation does not point to a fully synchronized pace of development as the northern and northeastern regions continued to lag behind, making policy efforts to promote coordinated regional development critical.

The outline of the 14th Five-Year Plan (2021-25), the country's development blueprint, has set out the need to step up efforts to optimize the economic layout among different regions and promote "relative balance" in development.

To strip out the distortion of the base effect on economic data, officials and experts have looked at two-year average growth in order to get a clearer picture of China's recovery.

Based on that measurement, experts said the economy of Hubei remained in contraction in the first quarter of the year, while Northeast China's Heilongjiang and Liaoning provinces only grew by 1.5 percent and 2.1 percent, respectively, far below the national average of 5 percent.

Wu Chaoming, chief economist at Chasing Securities, said the northern and northeastern provinces have been the lagging in their recovery as their economies are heavily reliant on traditional industries, leaving them in an inferior position in the ongoing recovery led by high-tech industries.

"The export-driven recovery in industrial output has been a key pillar of China's economic recovery since the second quarter of last year. This is partly why coastal provinces like Guangdong, Jiangsu, and Zhejiang are faring better than the nationwide level in spite of their large economic scale," Wu added.

Guangdong topped the economic scale among all regions in the first quarter with 2.71 trillion yuan ($417.9 billion) worth of gross regional output, up 18.6 percent year-on-year, according to official data.