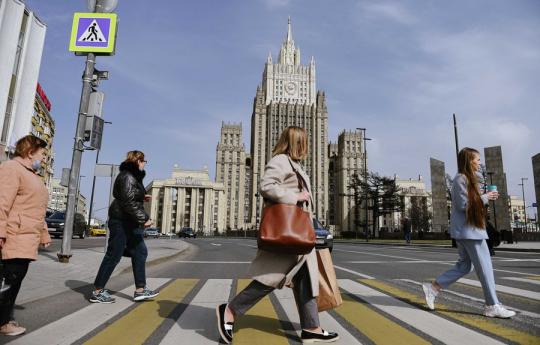 People cross the road in front of the Ministry of Foreign Affairs of Russia in Moscow, on April 16, 2021. (XINHUA)

The Russian Foreign Ministry said Sunday that it is expelling 20 staffers of the Czech embassy in Moscow in response to the expulsion of 18 Russian diplomats from the Czech Republic.

The ministry said in a statement that it summoned the Czech ambassador to Russia Vitezslav Pivonka and strongly protested against the unfriendly act of Czech authorities.

Pivonka was informed that these 20 people from the Czech embassy must leave Russia by the end of Monday.

The ministry also required the Czech embassy to reduce the number of locally hired staffers to the same level as that of the Russian embassy in Prague.

Czech Prime Minister Andrej Babis said Saturday that the country was expelling 18 staffers from the Russian embassy in Prague for the alleged involvement of the Russian special services in two ammunition depot explosions in 2014.

The Russian Foreign Ministry said earlier on Sunday that Czech authorities used "unfounded and far-fetched pretexts" to continue their anti-Russian tirade in recent years and to please the United States following recent U.S. sanctions against Russia.