Sanxingdui and Mayan cultures, similar across time and space 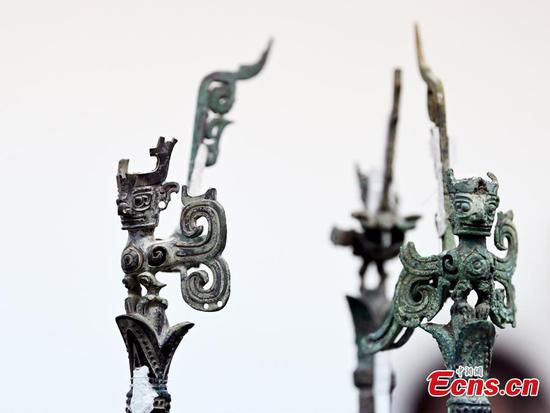 This photo taken on April 8, 2021 shows the bronze sculpture of a tree excavated in 1986 from the Sanxingdui Ruins site in Guanghan, southwest China's Sichuan Province. （Photo: China News Service/An Yuan）

Enveloped in a prehistoric aura, the Mayan civilization and China's Sanxingdui culture, while located in different continents, are as mysterious as they are ancient.

Significant discoveries were made regarding the latter, when China announced in March that archaeologists have found six new sacrificial pits and unearthed more than 500 items dating back about 3,000 years at the Sanxingdui Ruins.

The ruins, located in the city of Guanghan, about 60 km away from Chengdu, Sichuan, belonged to the Shu Kingdom that existed at least 4,800 years ago and lasted more than 2,000 years, considerably older than the ancient Maya.

In the eyes of archaeologists, however, mystique is not the only characteristic shared by the two primordial civilizations. In a recent interview with Xinhua, researchers revealed more coincidental similarities that transcend time and space.

BENEATH THE SAME SKY

In the eyes of Marco Antonio Santos, director of the Chichen Itza archaeological site in Mexico and a longtime researcher of Sanxingdui and Mayan cultures, the two civilizations developed in places at similar latitudes and with a similar climate.

"Sanxingdui and the Maya looked at the same sky. They had the same stars on the horizon," said Santos.

Li Xinwei, a researcher with the Institute of Archaeology of the Chinese Academy of Social Sciences, believes that latitude provides a breakthrough idea for studying the similarities between the two cultures, such as planting, cultivating and harvesting according to moon phases and that astrological signs are habitual for agriculture-based civilizations.

"They looked up to the same starry sky and lived in similar temperature zones," said the Chinese archaeologist, explaining the affinity of their natural environments.

Among the relics newly unearthed in the Sanxingdui ruins, fragments of bronze trees remind archaeologists of the Mayan equivalent.

Santos told Xinhua that Sanxingdui's remnants of bronze-made trees bear a striking resemblance to the sacred ceiba tree in the Mayan civilization, which symbolizes the union of heaven, earth and the underworld in the civilization that flourished in Mesoamerica.

"The representations of trees in both cultures with a symbolism that is very similar" denote "very important similarities," said Santos.

His view is also shared by Li, who said that many experts have pointed out that Mayan and Chinese civilizations could have inherited a certain shamanic religious belief in the late Paleolithic age.

The shamanic concept of axis mundi divides the universe into three levels: the underground, the human and the heavenly world. The sky tree connects the sky and the earth, and makes possible the communication between ruler and gods.

In a tomb found in Palenque, an ancient Mayan city-state in Mexico, archaeologists excavated a large sarcophagus with an exquisitely carved cover. It shows that the king of the city-state is reborn from the underground world and ascends to the heavens along the sky tree.

Santos has long been following with interest the archaeological progress of Sanxingdui, and the recent excavations have made him very excited. To him, the multifunctional operating systems "make the excavation really like a surgical operation."

During the last excavation work at Sanxingdui, a number of laboratories were installed. These "excavation chambers" are filled with equipment that could control temperature and humidity, and perform timely three-dimensional scans, recordings, and analyses of the excavation sites.

The technology used in the excavation of ivories in Sanxingdui is especially worth mentioning to Li. A new moisturizing material was used on the surface to create the same humidity for the ivories as they had during the thousands of years they spent underneath, he explained.

Santos said as the Mayan civilization is located in the wet and rainy Yucatan Peninsula, archaeologists often find it difficult to preserve bones after excavation.

"We can learn a lot from the archaeological projects in China," said Santos.

Sanxingdui is known as "one of the greatest archaeological discoveries of the 20th century," while many historians call the Maya "the Greeks of the New World."

Having explored the Mayan hinterland many times, Li believes that the Chinese civilization and Mayan civilization have shown "amazing creativity."

Li once led a China-Honduras joint archaeological team and used Chinese technologies to help with the excavation of a site in the ancient Mayan city of Copan.

"Human society has different paths of development, so we should respect and maintain this state of development of harmonious coexistence," he said.