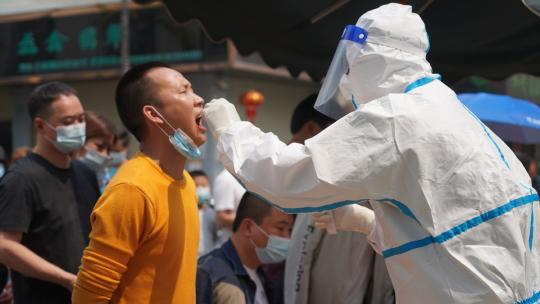 A range of measures including citywide nucleic acid testing, a one-week home quarantine and traffic curbs have been introduced in Ruili, Yunnan province, after nine people in the city tested positive for COVID-19.

The authorities in the city, which borders Myanmar, announced the strict measures to control the spread of the virus. They spoke at a news conference on Wednesday.

Ruili reported six locally transmitted, confirmed COVID-19 cases and three asymptomatic infections on Tuesday, among which five were Chinese citizens and four Myanmar nationals, according to the provincial health authorities.

As of 8 am on Wednesday, 317 people who had close contact with the patients had been placed under quarantine for observation. In addition, an expert team sent by the National Health Commission arrived in Ruili on Wednesday to guide the city's epidemic control and prevention work.

Citywide nucleic acid testing was launched at 8 am on Wednesday, and was due to be completed by midnight.

Yang Mou, the city's vice-mayor, said at the news conference that residents are required to stay at home. He explained that while the quarantine is initially set to last for one week, the precise time it ends will depend on the results of the citywide testing program.

While they are required to stay at home, families in the city can designate one member to go out to buy daily necessities.

All places of business, apart from supermarkets, pharmacies and markets for agricultural produce, will be closed during the lockdown.

Controls have also been introduced at the city limits to prevent traffic from leaving or entering Ruili, said Gong Yunzun, the city's Party secretary.

"People who must leave the city are required to present a negative coronavirus test taken within 72 hours. People entering the city will be asked to turn back," Gong said at the news conference.

Feng Baoxi, who runs a local jewelry business, completed a throat swab test within half an hour at his community located in the city's town of Mengmao.

"Based on previous experiences, we know there will be sufficient food. I am not worried about the latest infections, but I am very angry with those who have crossed the border illegally," he said, adding that he will be vaccinated after the lockdown.

The city has tightened controls along the border since the latest infections were reported. A total of 506 stations have been set up along the border with 3,902 people on duty, the city government said on Wednesday.