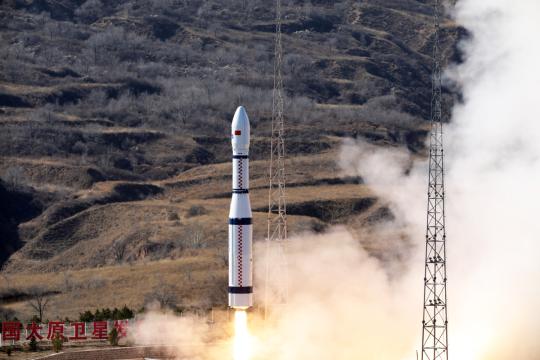 File photo: 13 satellites are blasted off atop a Long March-6 carrier rocket in Shanxi on Nov 6. (Photo by Zheng Taotao/provided to chinadaily.com.cn)

The China National Space Administration has revealed design specifications about the Long March 9, a super-heavy carrier rocket that will likely become one of the world's largest and mightiest launch vehicles.

Xu Hongliang, secretary-general of the administration, said on Tuesday afternoon in Haikou, capital of Hainan province, that the Long March 9 is in the research and development stage and is expected to enter service around 2030.

The super-heavy rocket will be 93 meters tall, have a liftoff weight of 4,140 metric tons and a thrust power of 5,760 tons. Its core stage will be about 10 meters in diameter, Xu said at the Wenchang International Aviation and Aerospace Forum's opening ceremony on Tuesday.

The craft will be so powerful that it will be able to transport spacecraft with a combined weight of 140 tons to a low-Earth orbit hundreds of kilometers above the planet, he said.

Li Benqi, deputy head of the Wenchang Space Launch Center's planning department, said at the opening ceremony that the rocket will also be able to place spaceships weighing up to 50 tons in an Earth-moon transfer trajectory for lunar expeditions.

He added that the center will construct a new launchpad and new testing and support facilities for the Long March 9.

Engineers at China Aerospace Science and Technology Corp, the country's leading space contractor, have started to conduct tests on the 500-ton-thrust liquid oxygen/kerosene engine, which is expected to become the nation's most powerful rocket engine, the company said.

Once Long March 9 enters operation, its carrying capacity will be more than five times that of Long March 5, currently the mightiest and tallest in China's rocket family.

The 20-story-tall Long March 5 has a liftoff weight of 869 tons and a maximum carrying capacity of 25 tons to a low-Earth orbit. A Long March 5 was launched early on Tuesday morning to send China's biggest lunar probe－Chang'e 5－to the moon.

The Long March 9 will be crucial in realizing the nation's ambitious plans for manned missions to the moon and sending large robotic spacecraft into deep space.

China Aerospace Science and Technology Corp has estimated that about 10 Long March 9s will be needed each year from 2030 to 2035 in China to serve the nation's robust demand for heavy-lift rockets.

More than 300 officials, scientists, engineers, business representatives and delegates from overseas space organizations took part in the two-day forum, the first of its kind in Hainan.

The island province in South China is determined to develop local space-related industries as a new engine for its economy, local officials said.