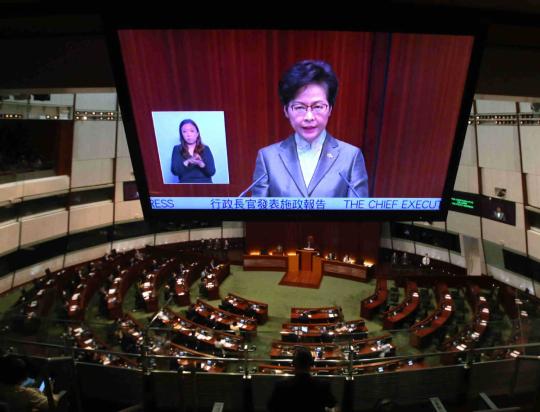 The address came after Lam's visit to Beijing and Guangdong province to seek support for economic revival, which highlighted the central government's backing for Hong Kong's deeper involvement in national development.

The support was shown in various areas, such as further integrating Hong Kong into Guangdong-Hong Kong-Macao Greater Bay Area development, maintaining its status as a global finance and aviation center and boosting its innovation and technological development.

The measures also include facilitating the entry of Hong Kong enterprises into the mainland market, offering vaccines for the city to fight the epidemic and improving the infrastructure of boundary control points between Hong Kong and Shenzhen.

Benefiting from its proximity to the mainland and the central government's firm support, Hong Kong can continue to capitalize on its strengths to serve the country's needs, with proactive participation in dual circulation development, Lam said.

Given the advantages of "one country, two systems", Hong Kong can take the Greater Bay Area development as an entry point to become a participant in domestic circulation and a facilitator of international circulation, she continued.

To drive forward these favorable policies, the city needs to comprehensively and accurately implement the principles of "one country, two systems", "Hong Kong people administering Hong Kong" and a high degree of autonomy, Lam stressed.

Given Hong Kong's political challenges in recent years, Lam said that an urgent priority is to restore constitutional order. After the implementation of the National Security Law in June, the city's stability has remarkably improved, she said.

The address included around 200 new measures, including major policy initiatives on housing, youth employment, and innovation and technology.

Lam said the government has identified 330 hectares of land to build 316,000 public housing units, satisfying demand for public housing over the next decade.

Meanwhile, the authorities have earmarked HK$100 million ($12.9 million) to subsidize 200 youth startups via a new funding program. Another program will be launched to encourage enterprises with Greater Bay Area operations to recruit up to 2,000 university graduates from Hong Kong.

Regarding innovation and technology, the government will launch a HK$2 billion five-year program to attract outstanding overseas talents.