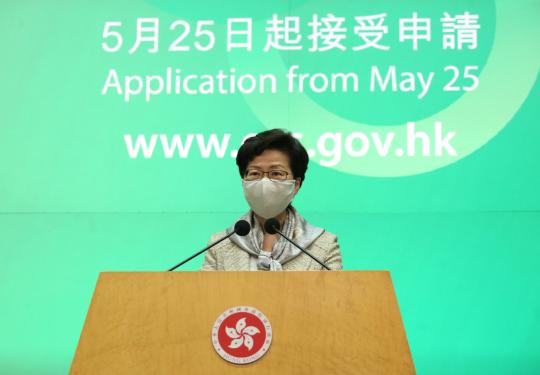 Chief Executive of the Hong Kong Special Administrative Region Carrie Lam Cheng Yuet-ngor said on Tuesday that it is a "disappointment" that the city has failed to perform the constitutional duty of enacting national security legislation according to Article 23 of the Basic Law since the SAR's return to the motherland almost 23 years ago.

Lam made the remark to reporters ahead of the weekly Executive Council meeting.

She said it is understandable that the legislation has become a cause for concern after violent protests, verging on terrorism, broke out in Hong Kong last year.

A recent report by the city's Independent Police Complaints Council said the city had been dragged into "an era of terrorism" by often-violent protests.

According to Article 23 of the Basic Law, the SAR shall enact laws on its own to prohibit any act endangering national security, including acts of treason, secession, sedition or subversion.

Ip Kwok-him, a deputy to the National People's Congress and member of the city's Executive Council, said the SAR government should go ahead and enact the legislation instead of "waiting for a proper opportunity". The central government showed its trust in Hong Kong when it authorized the city to enact the National Security Law on its own, Ip said. All Hong Kong people should cherish their civil rights and fulfill their responsibilities, he said.

Ip added that violence triggered by the now-withdrawn extradition bill last year showed that separatist forces and some foreign forces have been making "active moves" for their political purposes.

Without the legal basis to enforce the National Security Law, the hands of the Hong Kong government would be tied in controlling the situation, and the loophole would eventually be detrimental to the long-term interests of Hong Kong, he said.

Tam Yiu-chung, a member of the National People's Congress Standing Committee, agreed on the "need" for the legislation specified in Article 23. Tam said many people in Hong Kong have been looking forward to the legislation so the community can restore calm and avoid attempts at subversion.

He said if some politically motivated groups continue to damage the principle of "one country, two systems", it will undermine the central government's trust in Hong Kong.

Lam also expressed disappointment over a history question widely seen as inflammatory in the city's college entrance exam. The question asked students to write whether "Japan did more good than harm to China between 1900 and 1945", the period that covered the Japanese invasion, which led to tens of millions of casualties.

The Education Bureau has requested that the exam-setting authority invalidate the question.

Lam said it reflects a "failure of professionalism". "If our education is done incorrectly, the damage and severe consequences would be really beyond imagination," she added.